Jangheung Water Festival 2022: feel like a kid again, play with water guns and dance in the rain.

We are back from the Water Festival 2022 in Jangheung, Jeollanam-do!

The festival is celebrated not only for the reason that young people like to party but also to celebrate the clean and fresh water of Tamjingang River and Jangheung Lake.

The festival is an excellent way for the more rural region in South Korea to attract tourists and thus strengthen the area’s economy. Also, it is a well-organised, fun, and refreshing festival.
There were many different people, from children to the oldest generation in our society. It was also a good mix-match of Koreans and foreigners from all corners of the world.
Especially in times when Covid-19 and wars divide the world, it is these moments when various people celebrate together and become friends!

If you haven’t been there yet, you unfortunately already missed the festival this year. But good news: Adventure Korea will be happy to take you there and celebrate with you again in 2023! 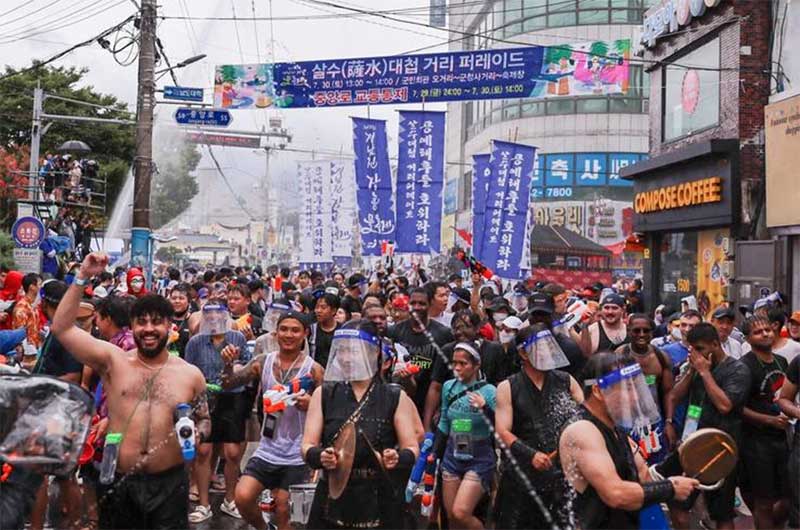 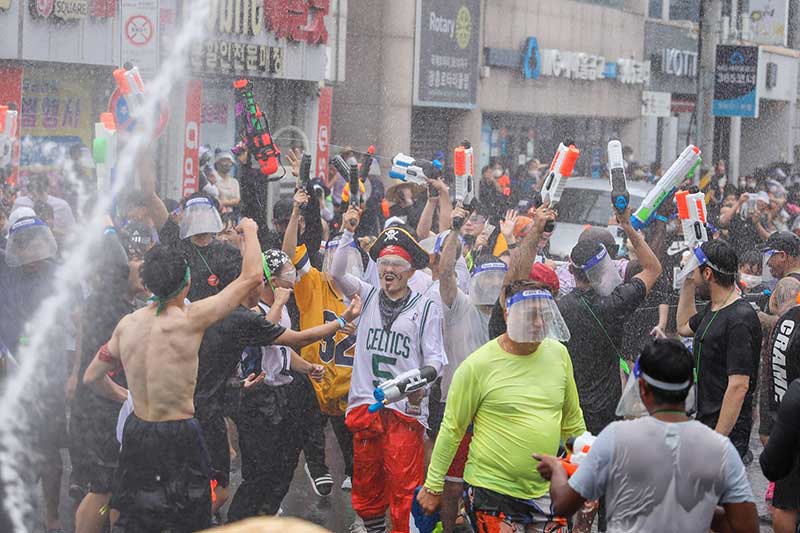 After a few hours’ drive from Seoul, we arrived in Jangheung at 1pm.
Equipped with a face shield, a waterproof pouch for our smartphones, and a really cool water gun, we went directly to the water parade, which took place in the middle of the city.
It took seconds to feel the first drops of water on us. The visitors of the parade splashed each other with water guns, the shops and stores on the sides of the street filled our water guns through water hoses, and small vans drove through the street. In their loading area, barrels filled with water, and people poured this water down on the visitors of the parade. Water sprinkler systems were installed so that water rained down on us, and even the fire truck drove through the street, participated in the parade, and sprayed the visitors with water. An unbelievable idea…

Even if it looks chaotic in the pictures, it was a peaceful parade where locals and foreigners could enjoy some fun together. People were in a great mood and were having fun with each other, even without speaking the same language! 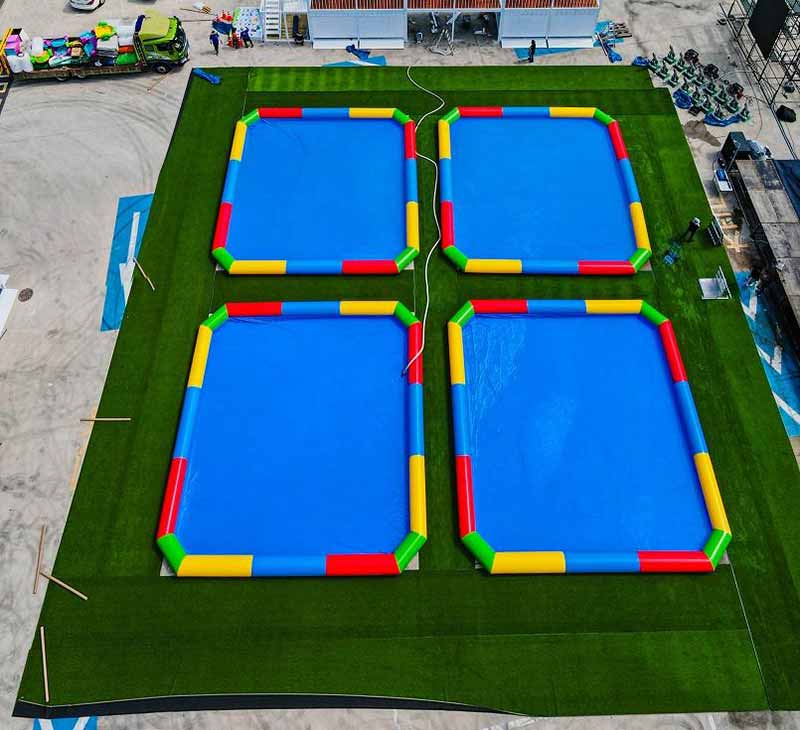 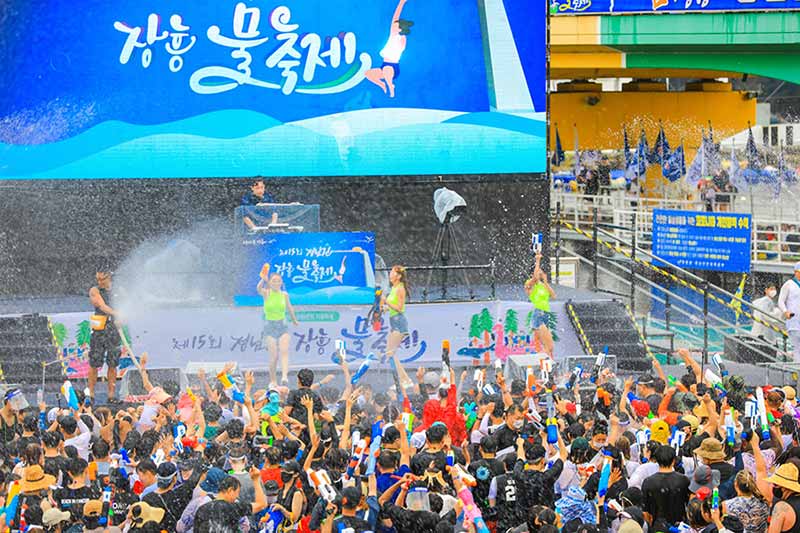 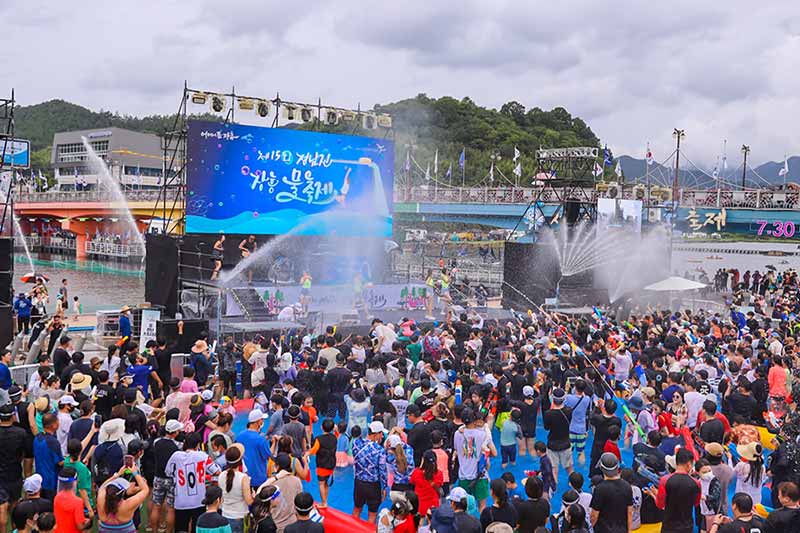 The parade led the crowd to the main square, where the biggest water pistol battle in the world took place. Four huge pools were filled with water. All the people shot each other with water pistols, and on the stage, we were entertained and hosed down by dancers and entertainers. We had a great time participating in the water gun battle with our friends and strangers for about an hour. Already at noon, a good DJ played the latest hits, so this experience stays unforgettable! 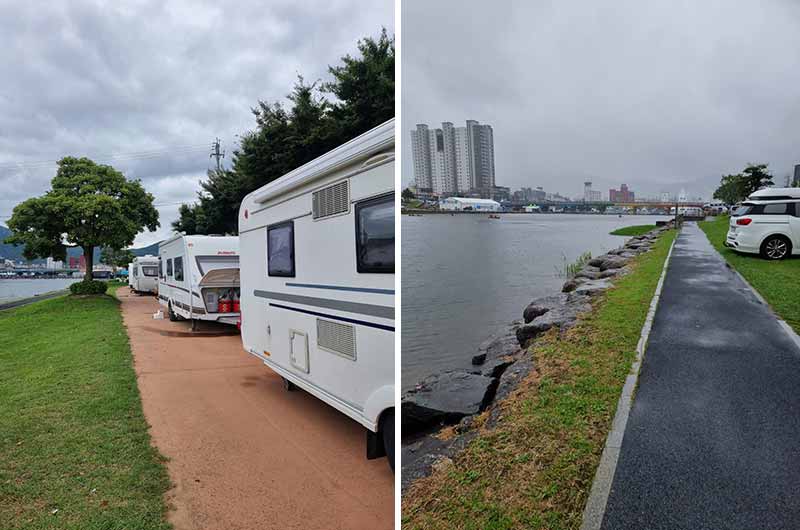 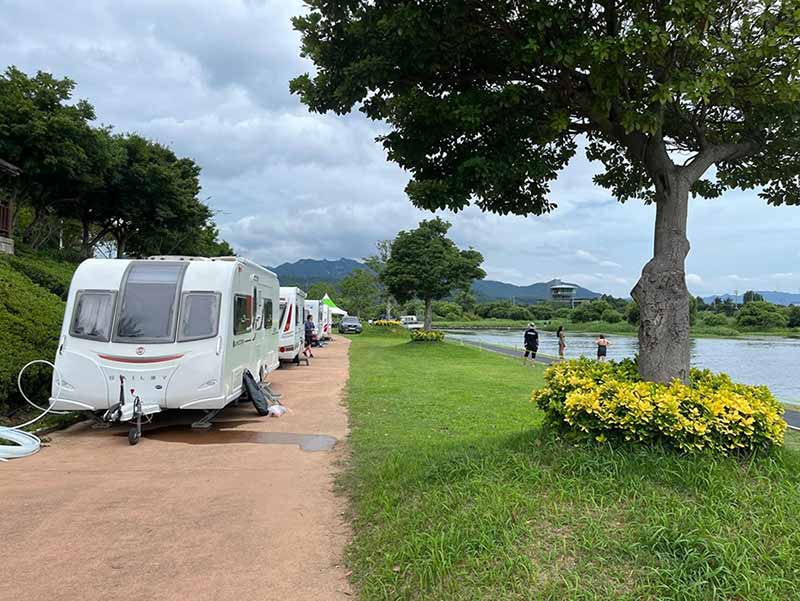 We then checked into our accommodation for the night. We had 10 caravans for 4 people each just for our group. The caravans were very well equipped and comfortable. They were also right on the river, so the festival was next door, and we had a nice view of the river and the festival going on at any time of the day.
We got ready for the rest of the afternoon’s activities and later ate a packaged dinner. We had delicious bulgogi with rice, japchae, and other side dishes. We were all thrilled with how delicious our dinner was. 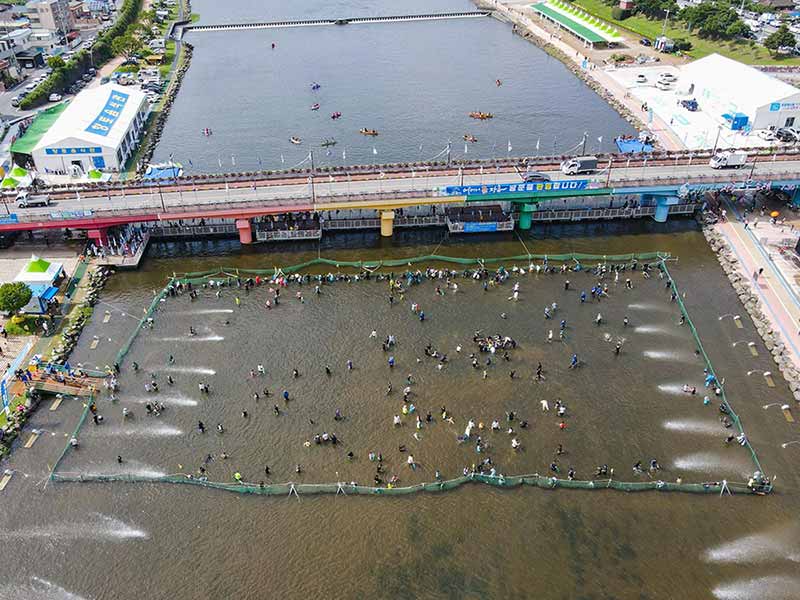 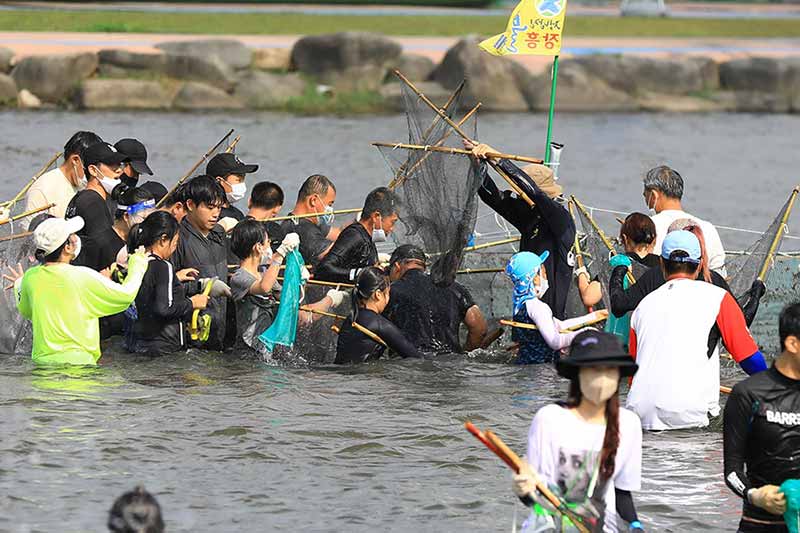 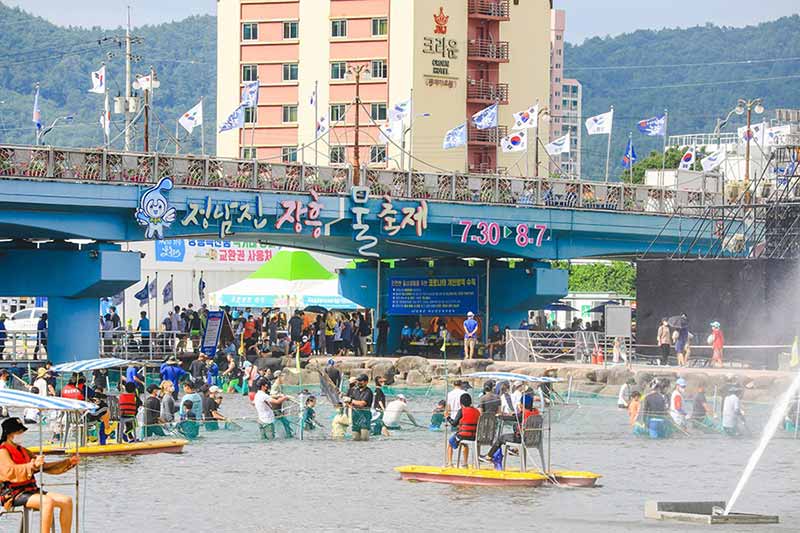 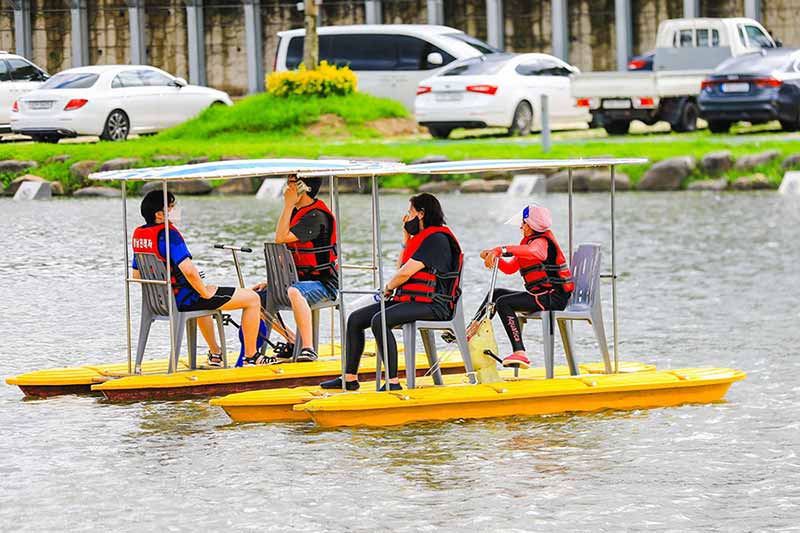 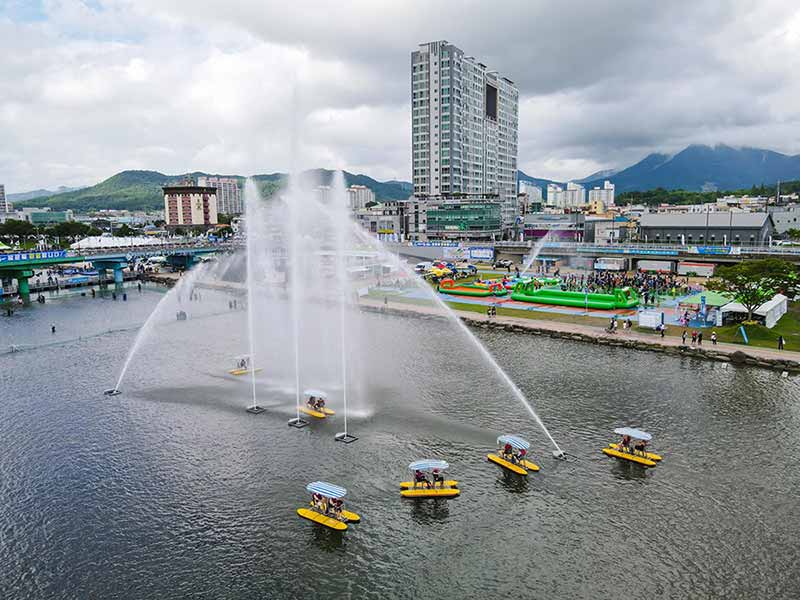 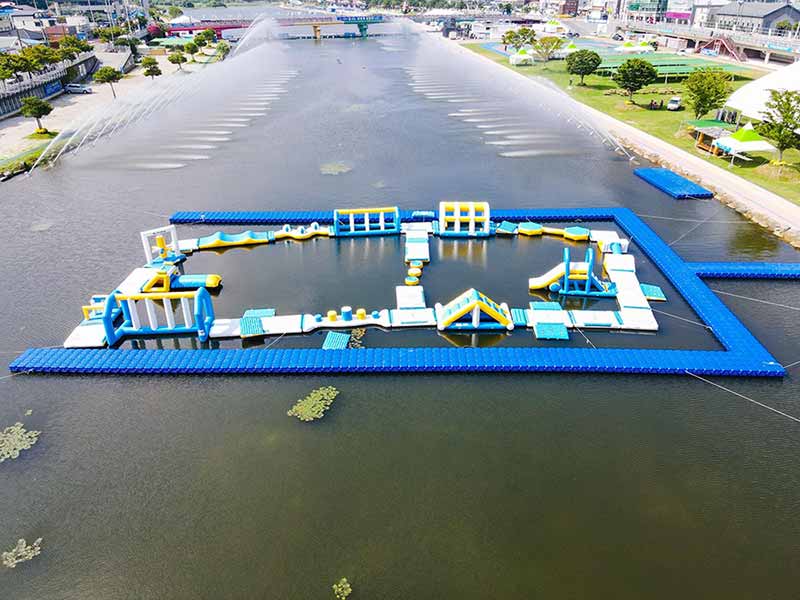 In the afternoon there were many fun activities offered by the festival.
For example, “Catch a Golden Fish” . In this activity, the participants had to find a golden fish in a cordoned-off area in the water. It was certainly not easy, but one lucky winner found the golden fish and won a prize. There were also water bicycles, which you could use to ride on the water and be cooled down by the water fountains.
My personal favourite is the Water Challenge Course! Mainly kids and young adults had a blast here! Even if we had fallen into the water while trying to run a whole round without falling into the water, we were not sad! It was amusing to fall into the water with other strangers and get through the Challenge Course. 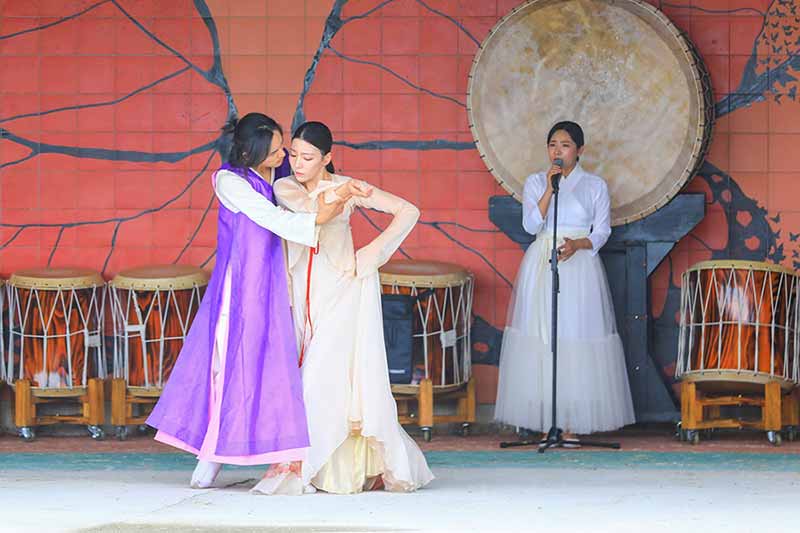 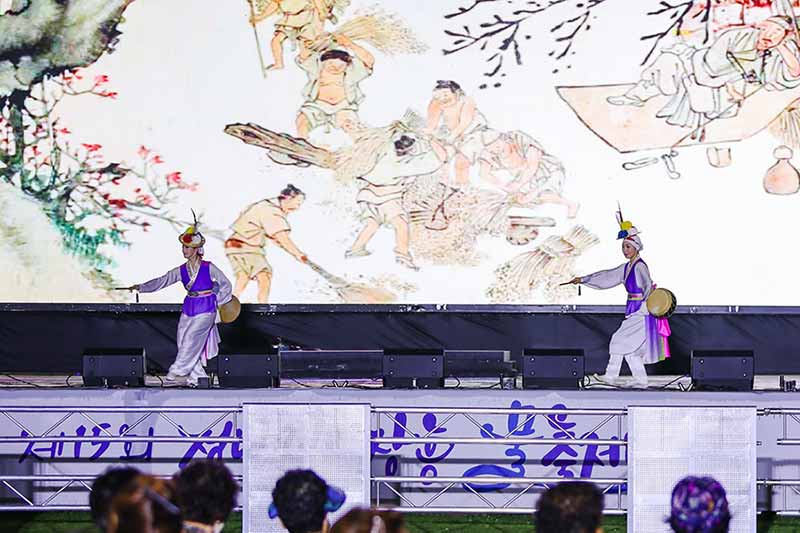 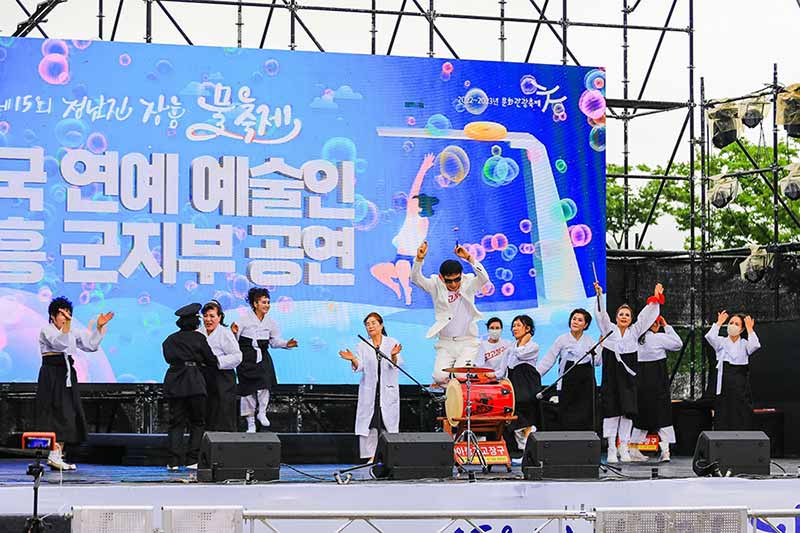 In the evening there was a big concert, starting with traditional Korean performances. Among them were dancers, singers, musicians and even a comedian. 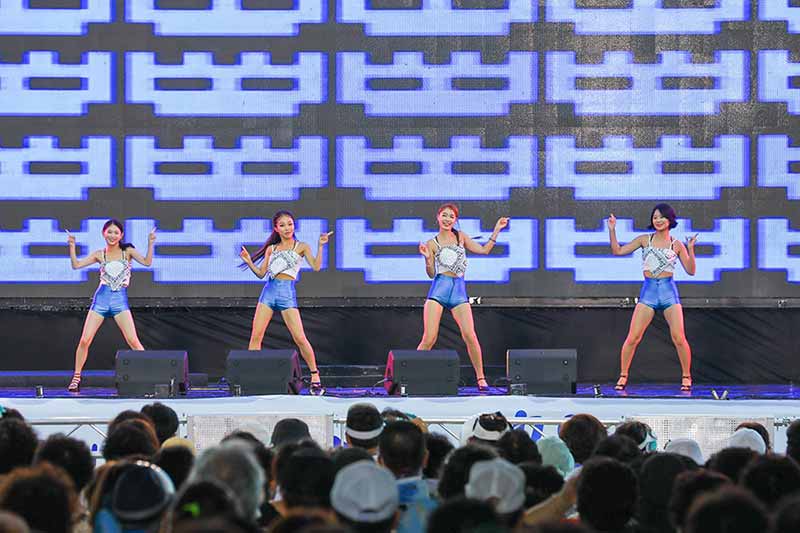 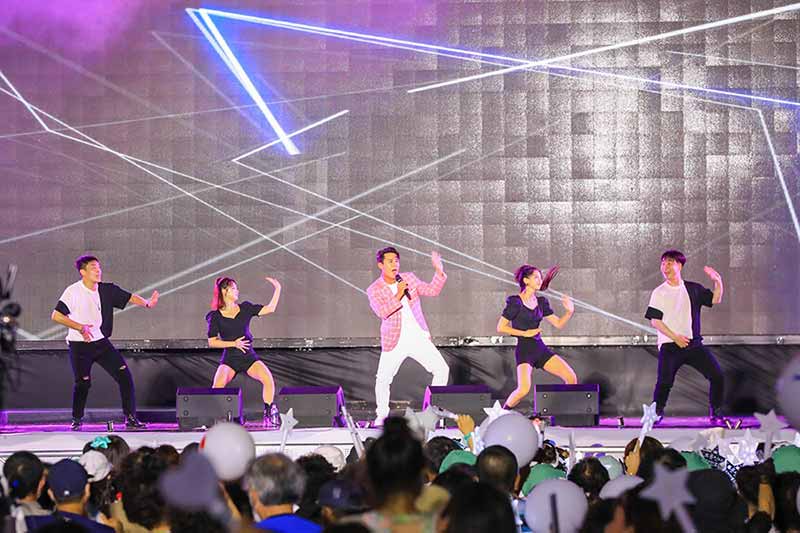 Later we could enjoy a KPOP concert. Many great artists were there and made for a great evening. The time flew by so fast! 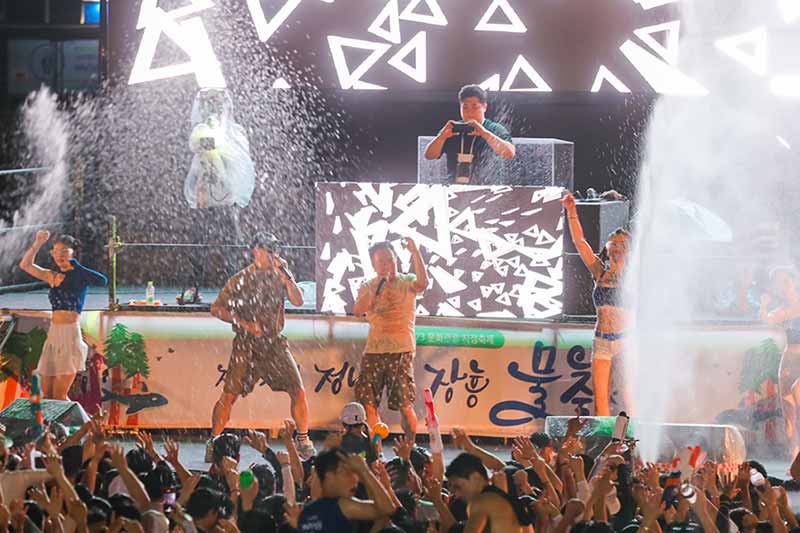 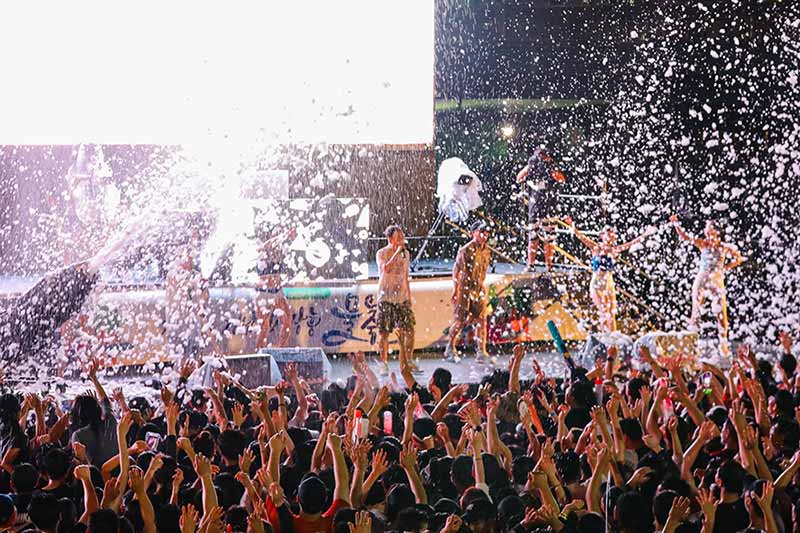 Finally, a big EDM party. A good DJ played here and made everyone dance and sing along. Even at the EDM party, the festival’s visitors did not stay dry and were further splashed with water. But the cannon that sprayed the water on the people was not the only one. Also, a foam cannon provided unforgettable sights, as the people visibly enjoyed the evening and danced enthusiastically. 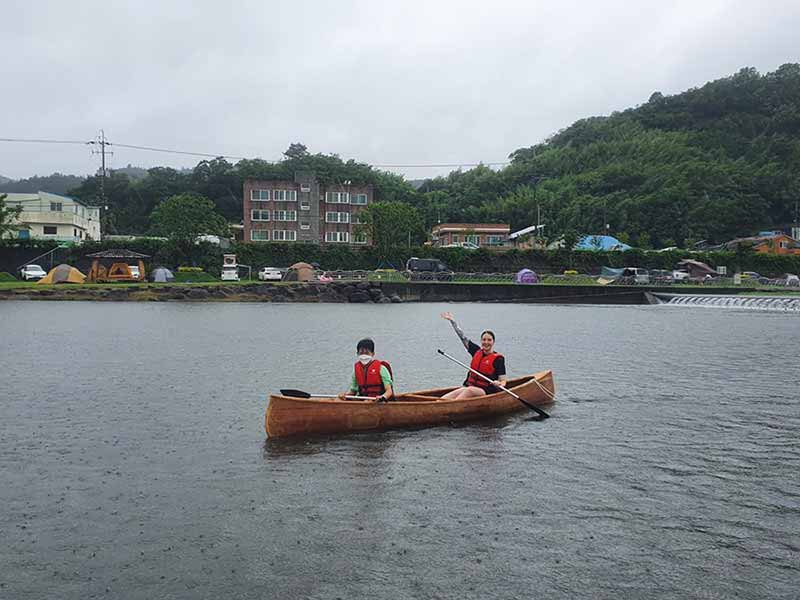 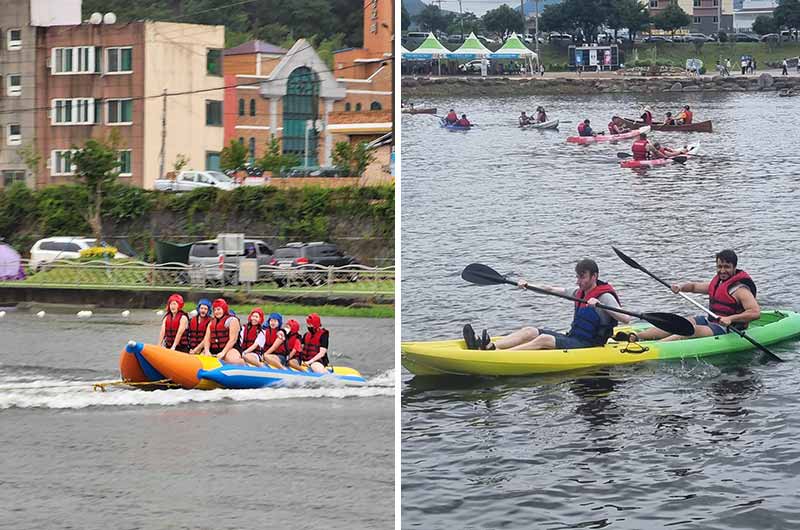 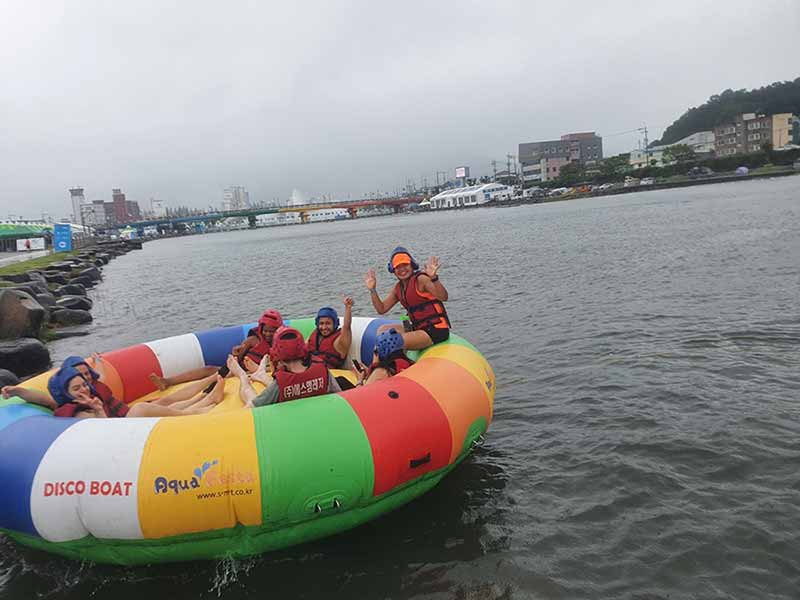 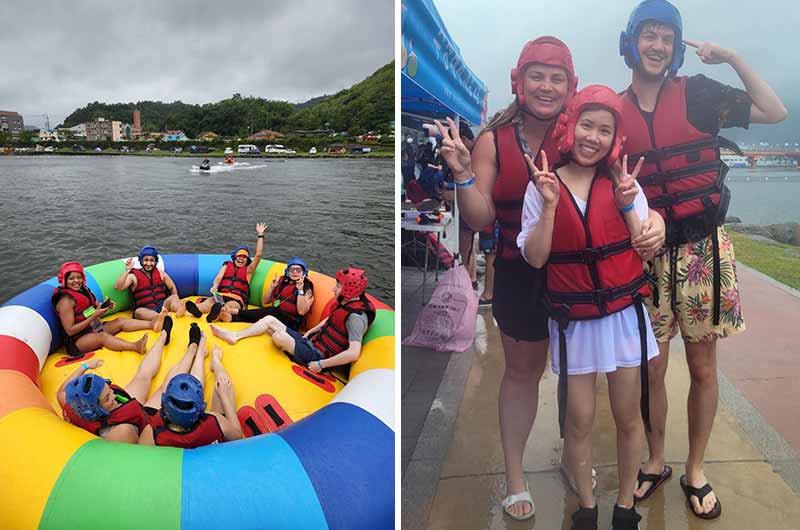 The following day, after breakfast, we still hadn’t had enough fun in the water, so we went kayaking and on banana and disco boats. Although it was raining, we still had a lot of fun! We didn’t mind the rain either, since it is a water festival, and we were already wet the whole weekend anyway. The rain fit quite well to the festival 🙂 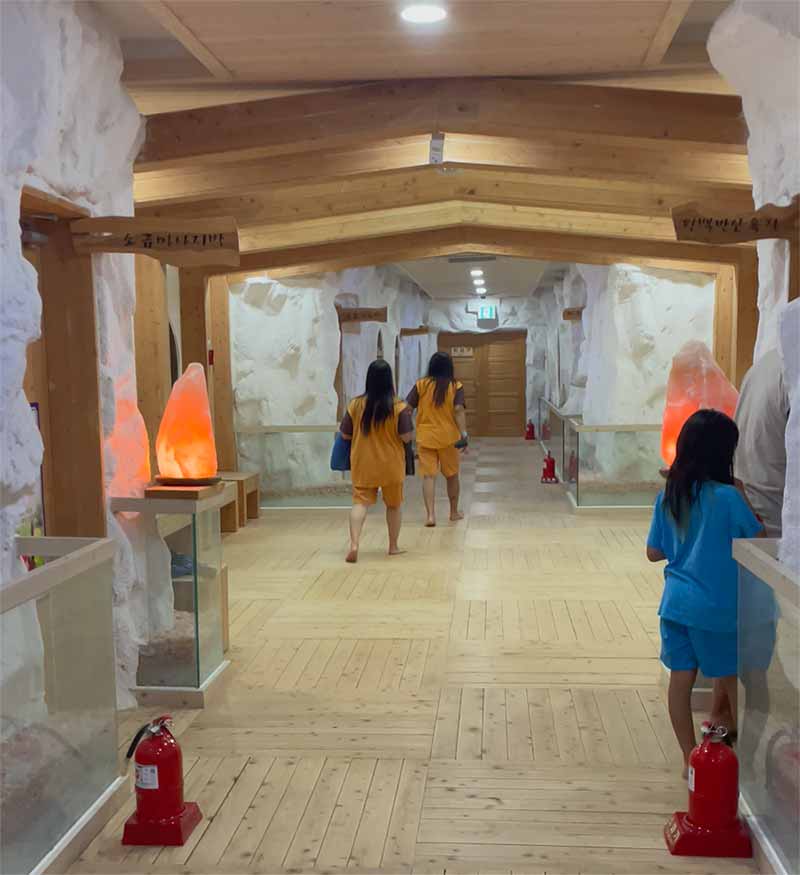 The Water Festival in Jangheung is definitely one of the best festivals in Korea. There is also no denying that the biggest water pistol battle in the world is even more fun than you can imagine.
Anyone who enjoys various water activities or just wants to cool off on a hot summer day, someone who is excited about the concert, or even someone who loves to go to crazy parties, the Jangheung Water Festival is the place to be!
Unfortunately, this unique event only happens once a year and if you didn’t make it there this year, be sure to go next year!
Believe me, you won’t regret it!
Also, the Cypress Forest Woodland is a beautiful place to walk and heal from the inside!
The combination of a water festival followed by relaxing in the spa makes Adventure Korea’s weekend getaway especially worthwhile.
We had an exciting weekend and arrived home relaxed and refreshed on Sunday evening, ready for the week ahead!