Where better to visit both an educational and equally stunning experience than the DMZ? This past weekend, a group of participants were able to take part in one of our Overnight DMZ Village Stays.

For many tourists visiting South Korea, the DMZ (The Demilitarized Zone) is a must-see location. Rife with history and modern turmoil, this place highlights the ongoing conflict between the two countries and their rich history as well. Located more-or-less around the 38th parallel, the DMZ stretches along the entire border—including the province of Cheorwon-gun.

We visited a historic village right on the border, experiencing the opportunity to look across the border into North Korea and to visit other key locations for insight into Korean culture and history. 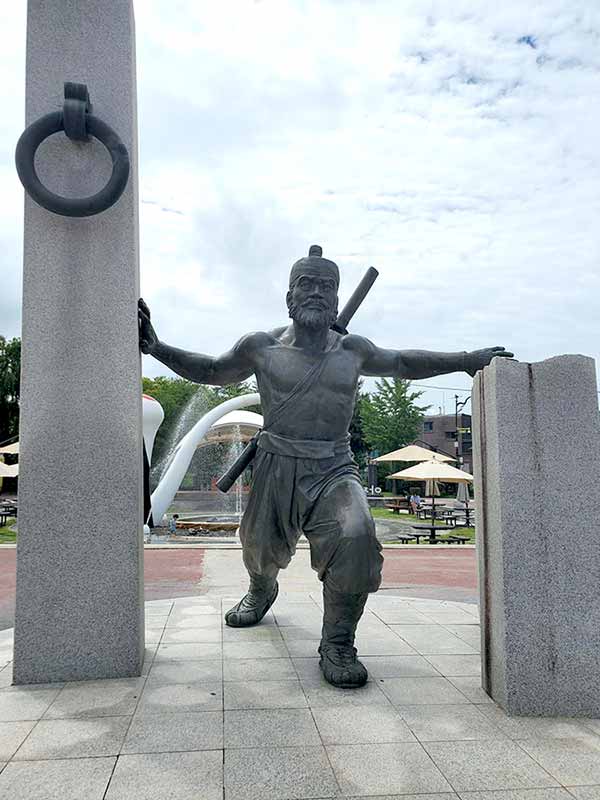 A statue at the start of the Goseokjeong Canyon entrance

Only about an hour outside of Seoul is Goseokjeong Canyon, our first stop on this trip. This location offers stunning views of the local river from the Goseokjeong Pavilion—a local monument in Gangwon-do. Acting as a starting point and stepping stone to our tour of the DMZ, it highlighted the natural beauty of the area. 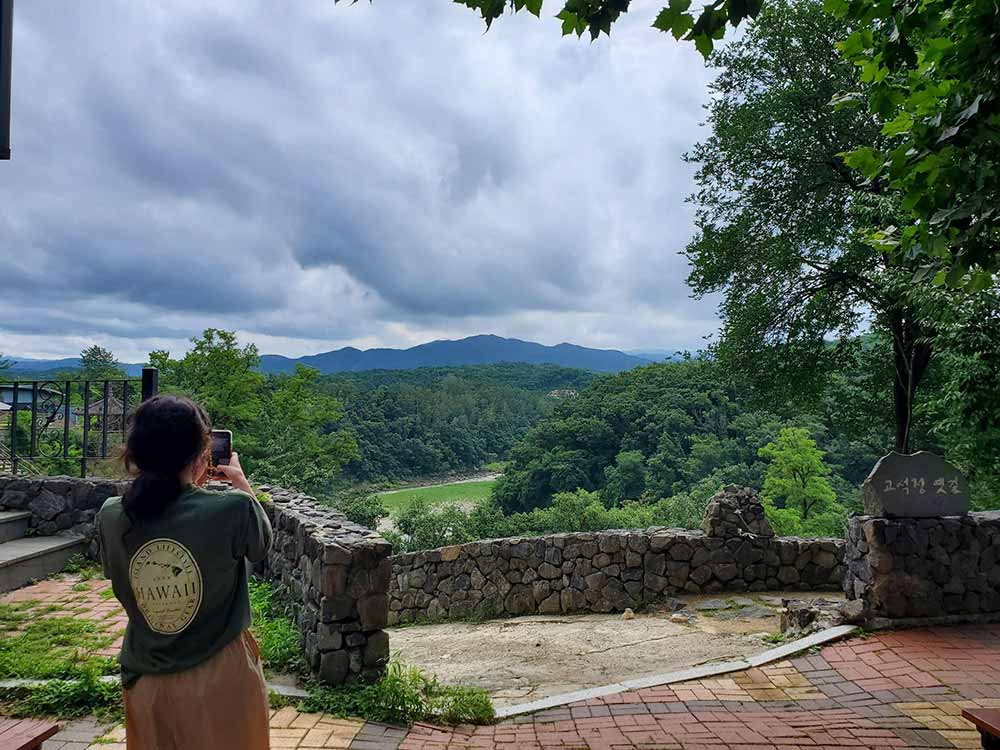 One participant taking a scenic photo at Goseokjeong Canyon 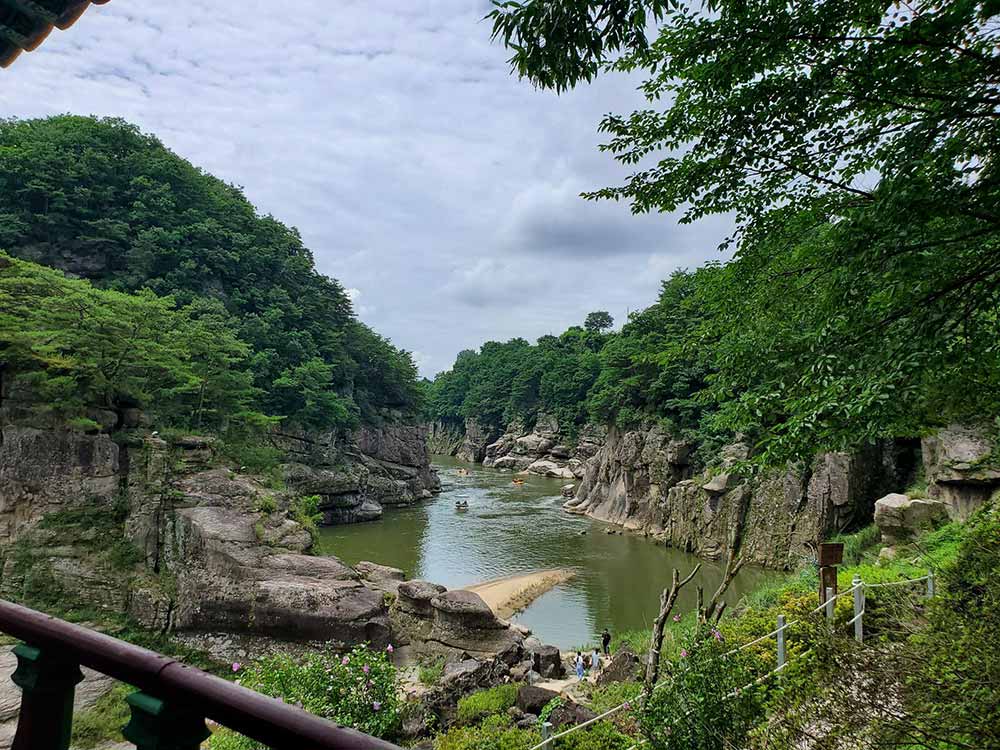 The view of the river from Goseokjeong Pavilion

After a short stop at this small town for lunch and sightseeing, we were back on the road heading further into Cheorwon Province. We eventually crossed through the Civilian Control Zone at the DMZ to begin our tour properly. With a brief check by security, we were in.

We stopped at the Unification Peace Observatory which allows people to view North Korea through the many binoculars on the upper deck. Acting as both a mini-museum and observatory, it gave us insight into the area and the battles fought here. Alongside the mountains, we were also able to see the North Korean propaganda village and even a North Korean soldier at an outpost during our time here!

From here we visited the 2nd Infiltration Tunnel, which has been closed to the public for the past several years. It was rather cool inside the tunnel, which was a pleasant relief from the heat of the sun. Our local guide was quite informative on the history of the tunnel and tasked us with finding the ‘evidence’ of how the tunnel was created. There were many signs we found to show that it was not a naturally occurring tunnel, as North Korea claimed when it was discovered. We were all glad to be equipped with helmets during our visit, as we hit our heads on the ceiling more times than we’d like to admit! 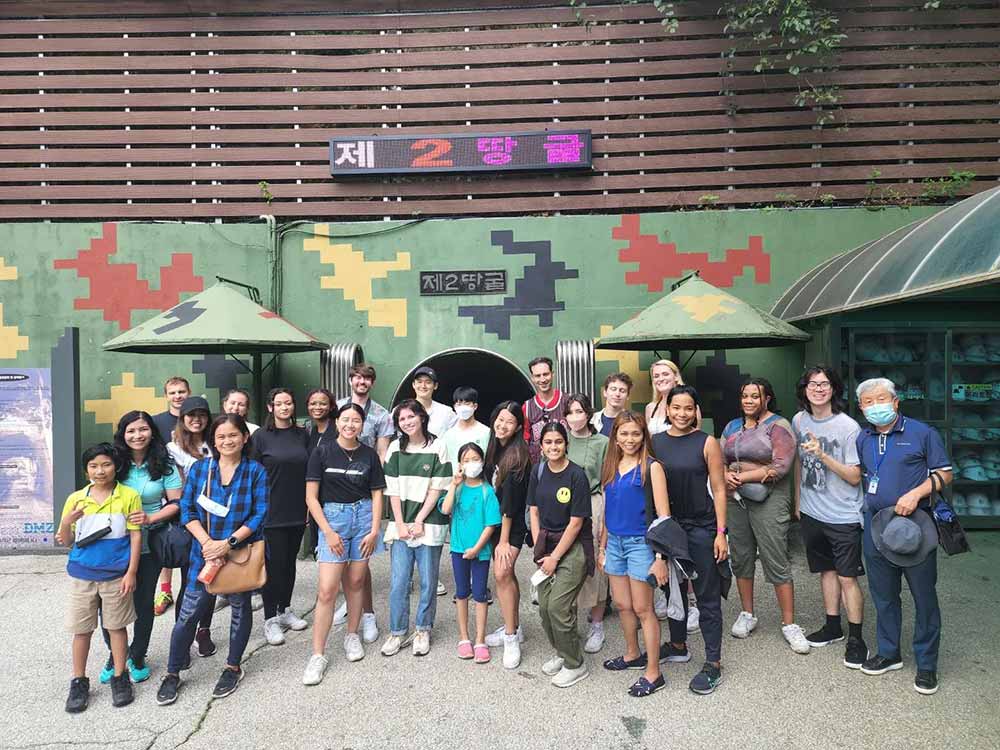 Left: Participants heading down the stairs of the access tunnel Right: A view of the tunnel as we walked down the length of it 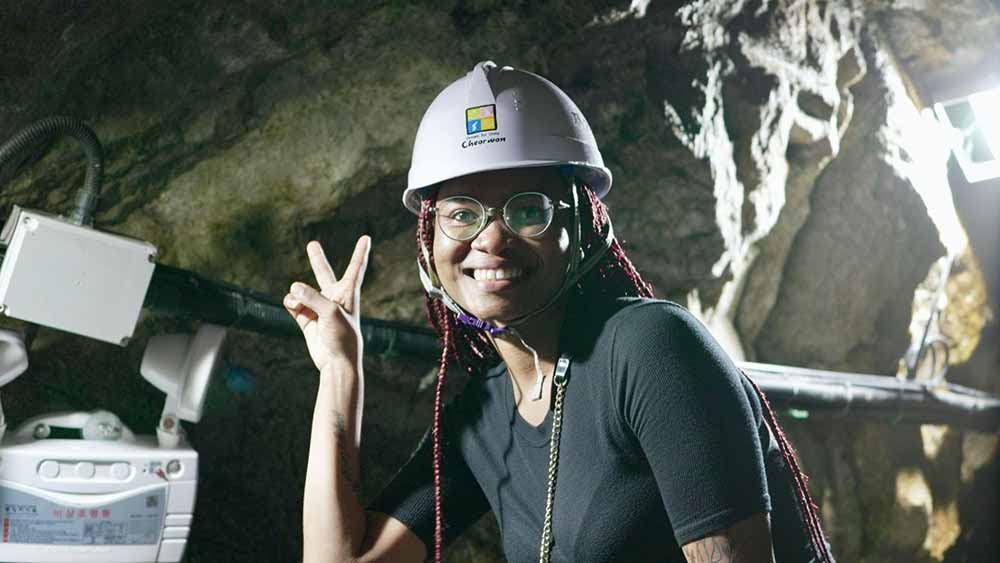 One of my favorite locations by far was the Labor Party Building. This building was constructed by North Korea in a Russian architecture style. It was significantly damaged during the war and you can still see the munition holes in the building, as well as the markings of a tank which climbed the front steps. This is a building with a dark history, though it has in recent years become a symbol within the art/entertainment community in South Korea.

We wrapped up the day with a BBQ dinner prepared by the local villagers and enjoyed a late night pool party at our accommodations. Everyone had a blast, even despite the ice cold mountain water! 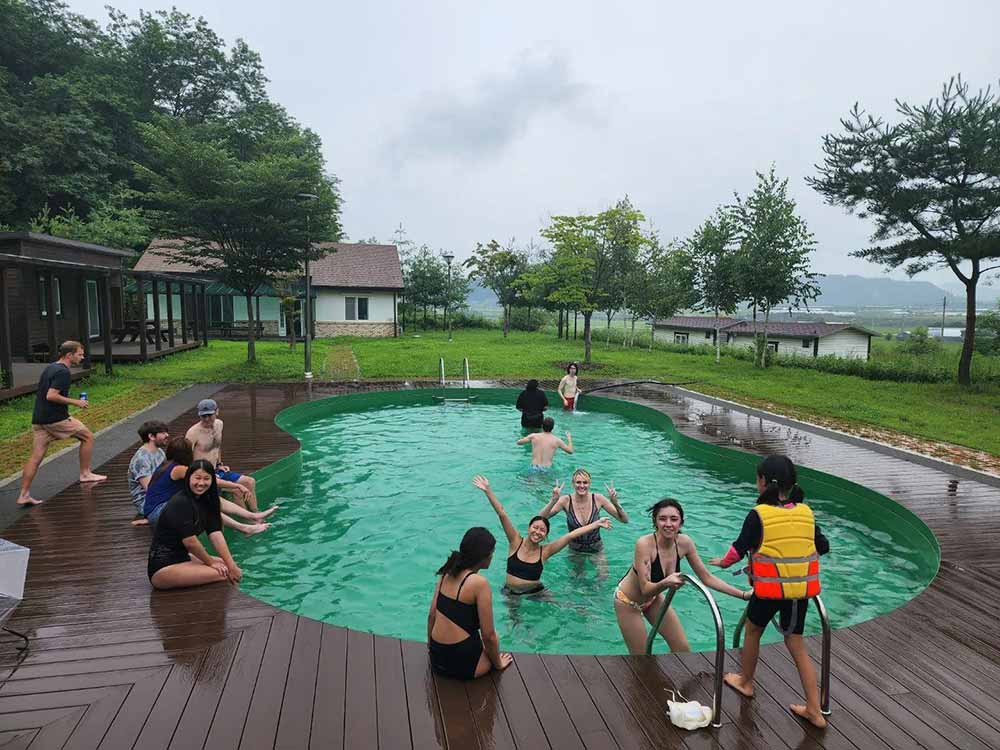 Pool party at our accommodations in the afternoon

The next day we visited the Korean War Memorial and the Baekmagoji Battlefield, where one of the bloodiest battles in the Korean War took place. It was an insightful place and gave us plenty of time to reflect. The memorial included a large South Korean flag that is visible from North Korea. 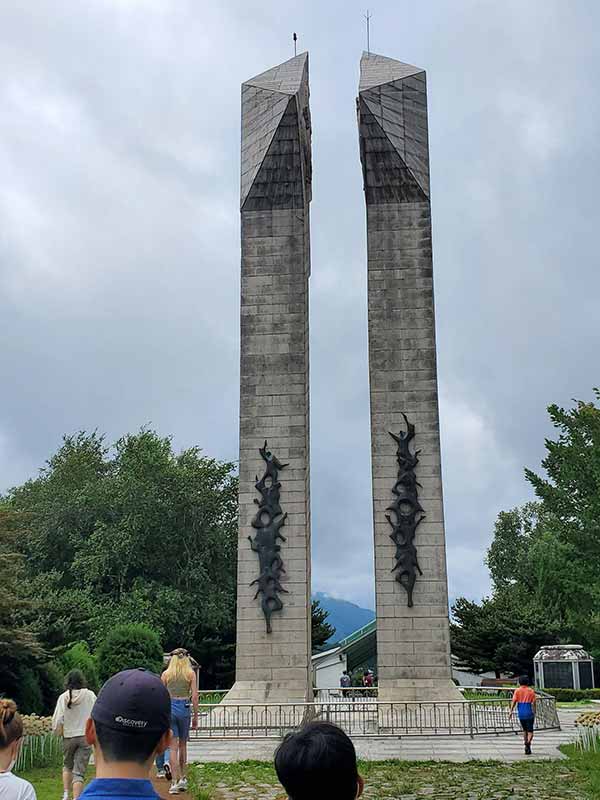 The Korean War memorial as viewed from the back

Afterwards, we had an opportunity to create some traditional rice clay cakes with the guidance of a local teacher. These were both fun and a little difficult to create. It really tested our creativity skills! The taste was well worth a little bit of struggling, and everyone enjoyed making their own edible creations. We even got to box up a few of our creations to take home with us. 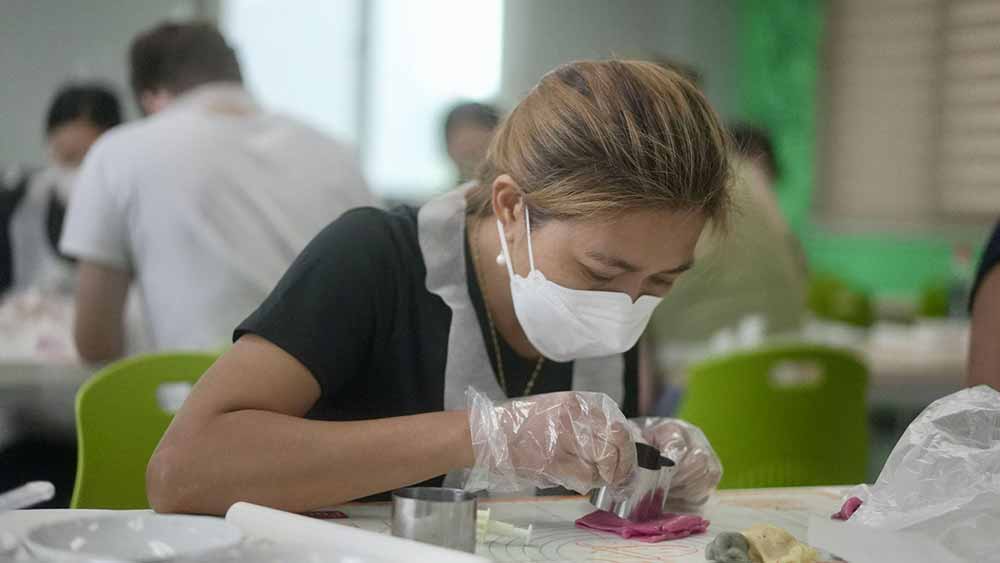 One participant creating the shape of the rice cake

To wrap up our exploration, we stopped at the Cheorwon Jusangjeolli-gil which follows the canyon walls around the Hantangang river. With a 3.6km trail, we got to see stunning cliffs, waterfalls, and the white-water rapids in the river below. This trail did push people’s comforts with height due to the see-through nature of the grated flooring, though it wasn’t enough to deter any of us from enjoying this spectacular view! This Unesco Global Geopark is well worth a visit if you find yourself in the area.

From there, we wrapped up our trip and began our drive back to Seoul. Everyone was tired, but the bus ride back was still buzzing with excitement as everyone recalled their experience. This was a memorable trip for everyone involved, myself included!

For those here on a short trip, this is a perfect way to wrap up your experience in South Korea. I highly recommend taking the time and joining us on our next trip here.