Phoenix Park, located in Pyeongchang county in Gangwon Province, is recognized as one of the most popular ski resorts in South Korea. Having hosted the 2018 Winter Olympics, skiers and snowboarders from all over flock to Phoenix Park to experience the high slopes and soft snow for themselves. Despite the regular inflow of customers at the resort and the large crowds that form there in the winter, the surrounding city area remains rather small and simple. Excluding the extensive number of ski rental shops lining the streets, there aren’t that many buildings and because of that, choices for restaurants are somewhat slim. If you’ve read my past blog posts, you would know that I’ve visited Phoenix Park in the past with Adventure Korea on a 4-day ski trip. Since then, I’ve returned to Phoenix Park two other times this year. Inevitably, I’ve eaten at quite a few places around the area. So, here is a short list of some of the places I’ve eaten at while staying at Phoenix Park: 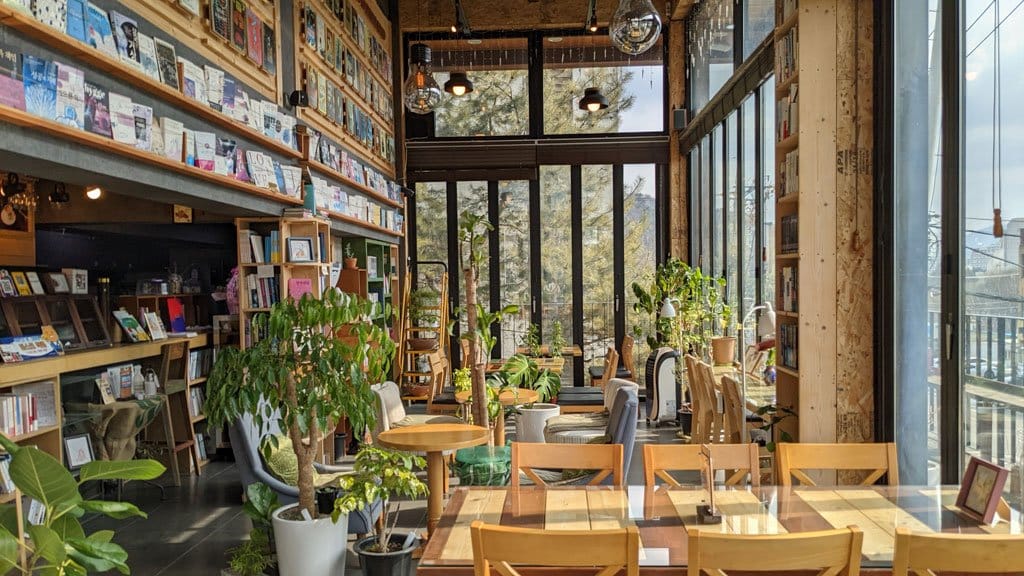 Sesujak is a small woman-owned book cafe that serves delicious drinks and brunch with a cozy atmosphere. The cafe is rather small with only 7 tables, but the floor-to-ceiling windows help to open the space up. Various colorful books line the walls and plants are placed everywhere. I’ve been to Sesujak every time I’ve gone to Phoenix Park and each time the owners have been absolutely lovely. The one owner can also speak some English so even if you don’t know Korean, ordering isn’t a problem. The food at Sesujak is fantastic; I’ve tried their udon, lemon tea, salmon eggs benedict (ordered without hollandaise sauce), and coffee. There wasn’t a single thing I disliked! 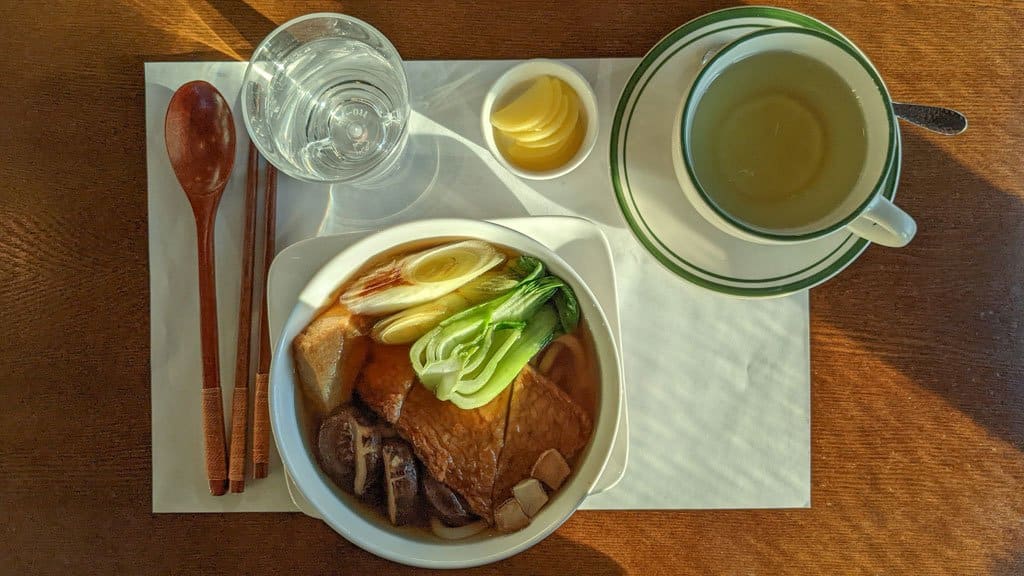 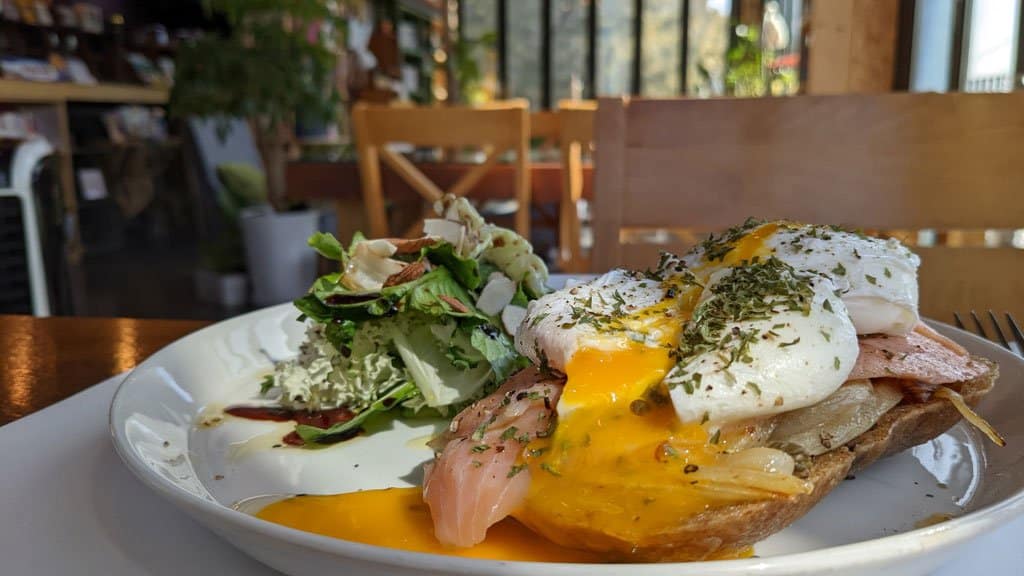 Some things to note: First, the cost of the food is a bit high (the udon was 10,000 won and the salmon eggs benedict was 17,000 won). While these prices aren’t outrageous compared to the prices of western-style brunches I’ve seen elsewhere in Korea, it is still a pretty penny to pay. Also, it does take a while for the food to come out, so give yourself a bit of extra time to eat if you plan on going. All in all, Sesujak is my favorite place to visit while staying in the area; from the atmosphere, to the kind owners, to the delicious food and drinks, it’s an incredibly inviting space perfect for relaxing after a long day. 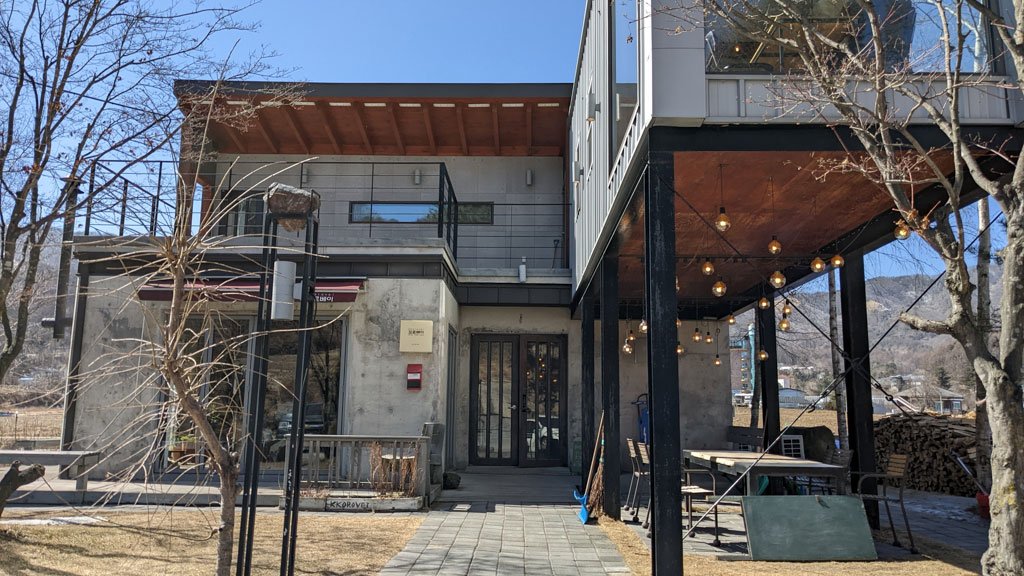 Kkorovei is a cafe and restaurant that specializes in making western-style dishes using local ingredients. Their menu includes items like pasta, sandwiches, Korean beef burgers, and homemade organic bread. They also make their own jams, marmalades, and stewed chestnuts which they sell online and in-store. I visited Kkorovei on the last day of my last trip to Pyeongchang, but I wished I had found them sooner! The building has a first and second floor. The first floor is mostly taken up by the open kitchen and shop area. The second floor has about 6 large tables to sit at. There is also an outdoor seating area, but since it was winter when I visited, no one was sitting outside. 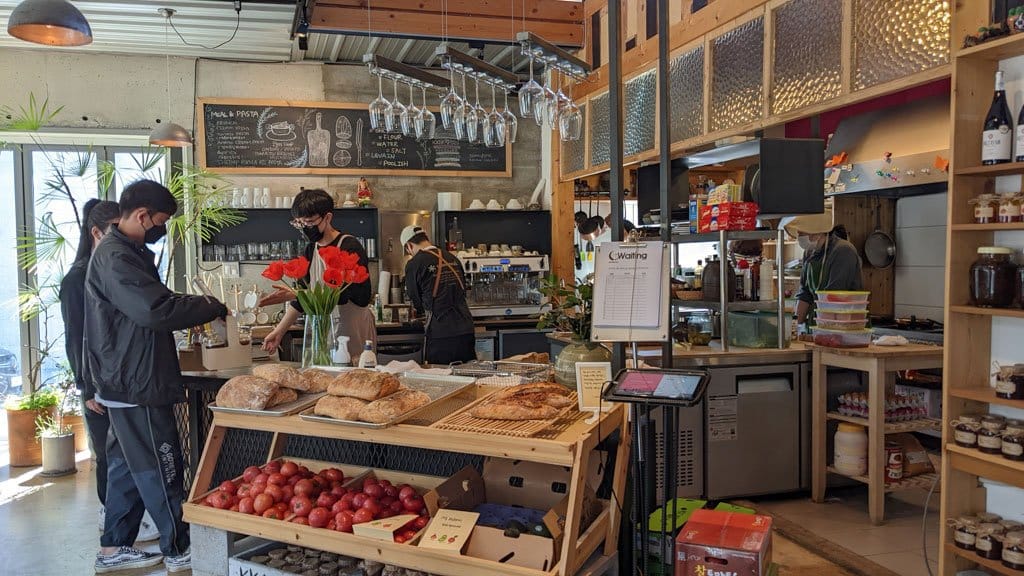 I got their brunch plate which came with salad, avocado, egg, shrimp, chickpeas, tomato, bread with marmalade, sausage (which I omitted), and a cup of coffee. It was absolutely delicious! I could tell how fresh each ingredient was just by biting into it. The bread was topped with some of their homemade apple marmalade which was addictingly good, being a mix of sweet and cinammon-y. If you visit, definitely make sure to pick up a jar to take home! 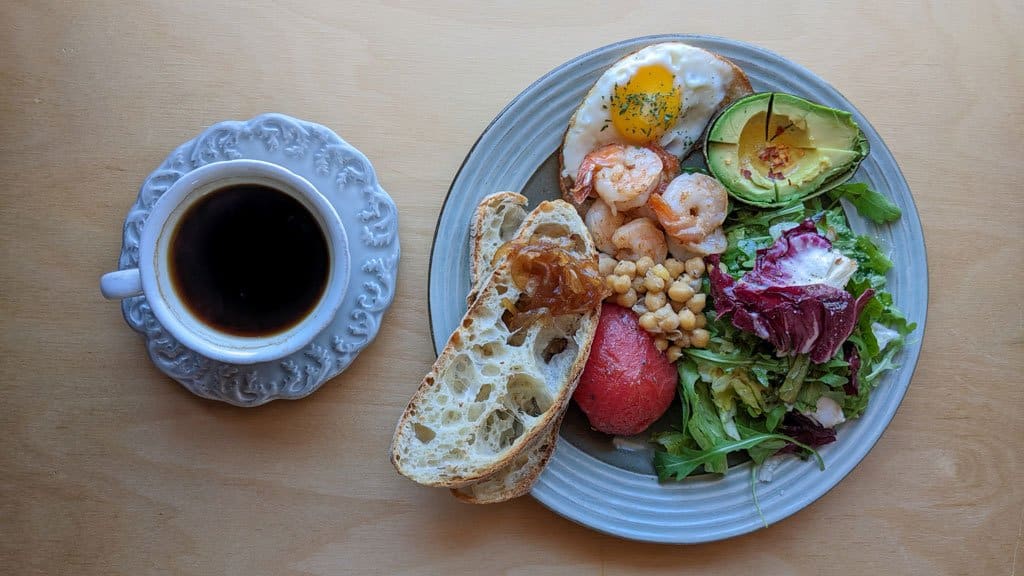 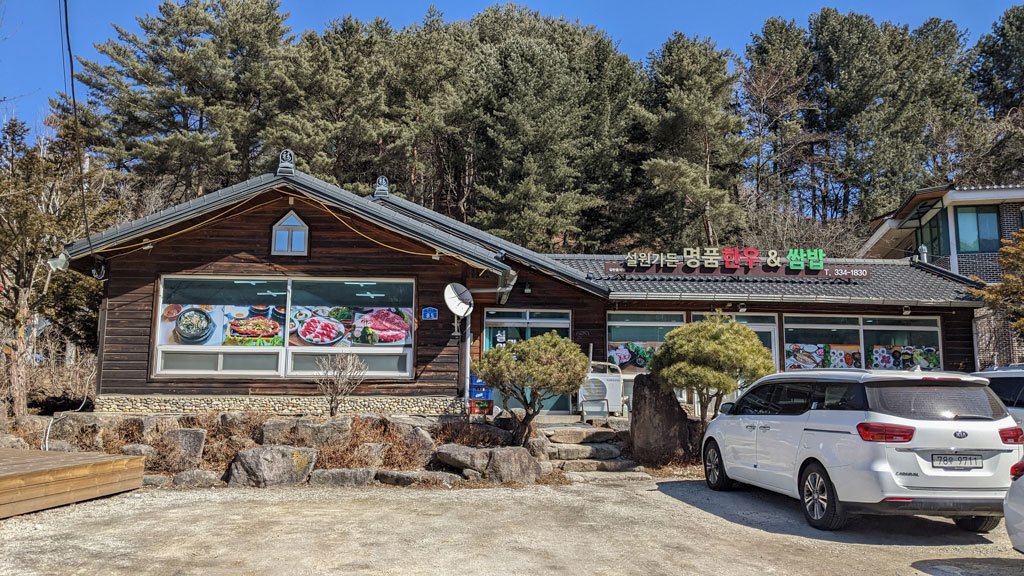 This restaurant specializes in ssam bap (Korean lettuce wraps). Along with your main dish of choice (options include grilled mackerel, pollack, beef brisket, pork belly, and braised bellflower), you will be given lots of banchan (side dishes), lettuce and dipping sauce, soybean soup, and purple rice with beans. When I went, I ordered grilled mackerel. The fish was moist and had tons of flavor! The banchan and soup were good as well and the purple rice was a nice addition! I ate every last bit and was extremely satisfied. I will note that you cannot eat alone here, so bring someone with you when you go! 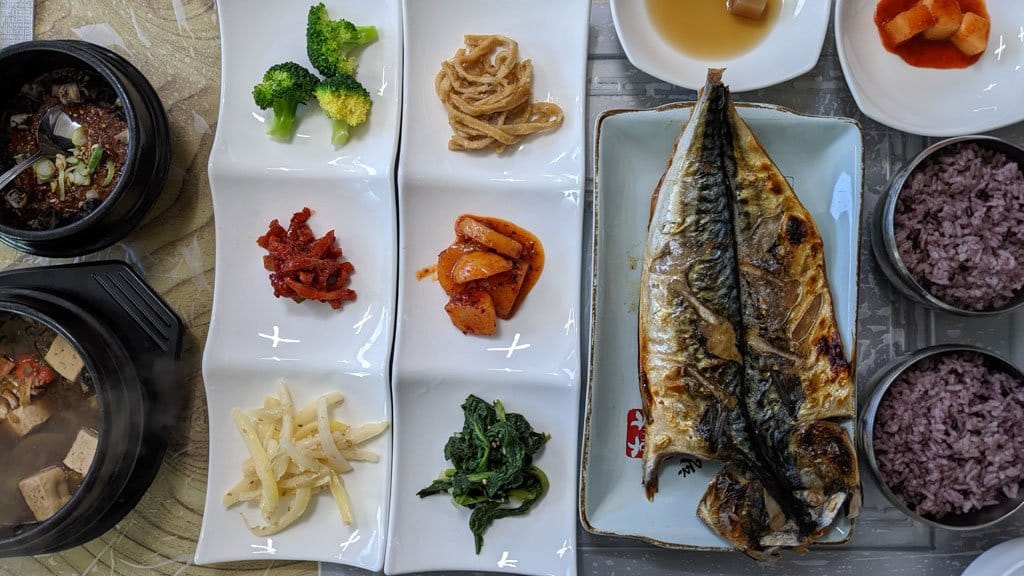 I’ve eaten at Gwangmyeong twice and overall I think this place is okay. The first time I went I ordered the pollack seaweed soup and found it rather bland, but my second time I ordered cheonggukjang (extra-strong fermented soybean soup) and thought it was tasty. They offer a small assortment of side dishes which are hit-or-miss for me. I wasn’t the biggest fan of their kimchi the first time, but the second time it was okay. I also consistently liked their fishcakes. Overall, I personally find the food to be fine however, I know other people that really loved the place, so it might just be personal preference. 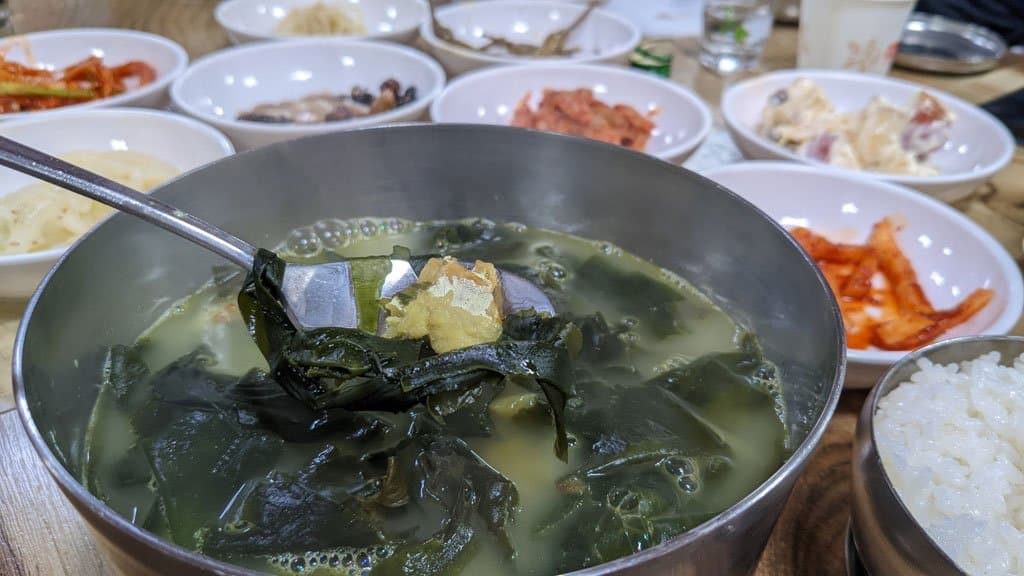 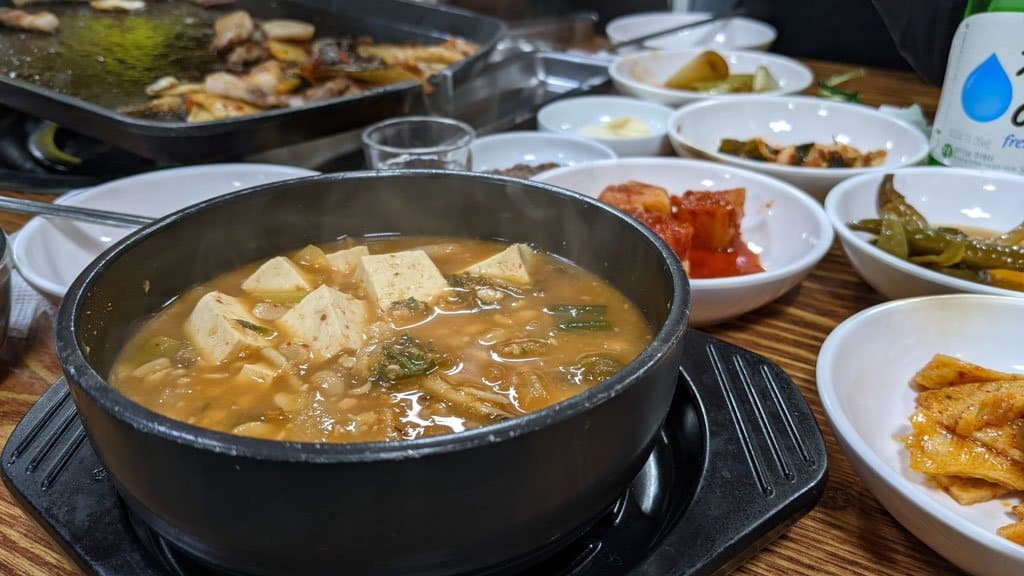 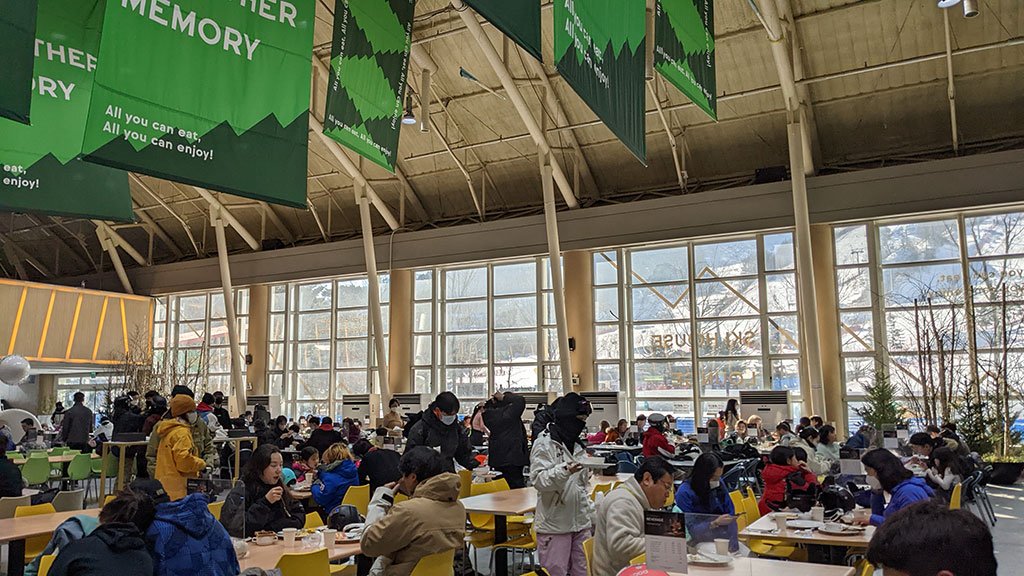 Finally, (and perhaps most obviously) I ate at Phoenix Park! Inside the resort, on the second floor on the left, there is an all-you-can eat buffet offering a variety of Korean and Western-style dishes including fried rice, japchae, fish cake soup, kimchi, toast, yogurt, salad, and more. They also have coffee, soda, citrus fruit tea (yuja cha), and water to drink. The buffet food was better than I had expected, though they definitely had more options for breakfast and lunch than they did for dinner. There were also plenty of vegetarian and dairy-free foods to choose from when I went, which was nice. 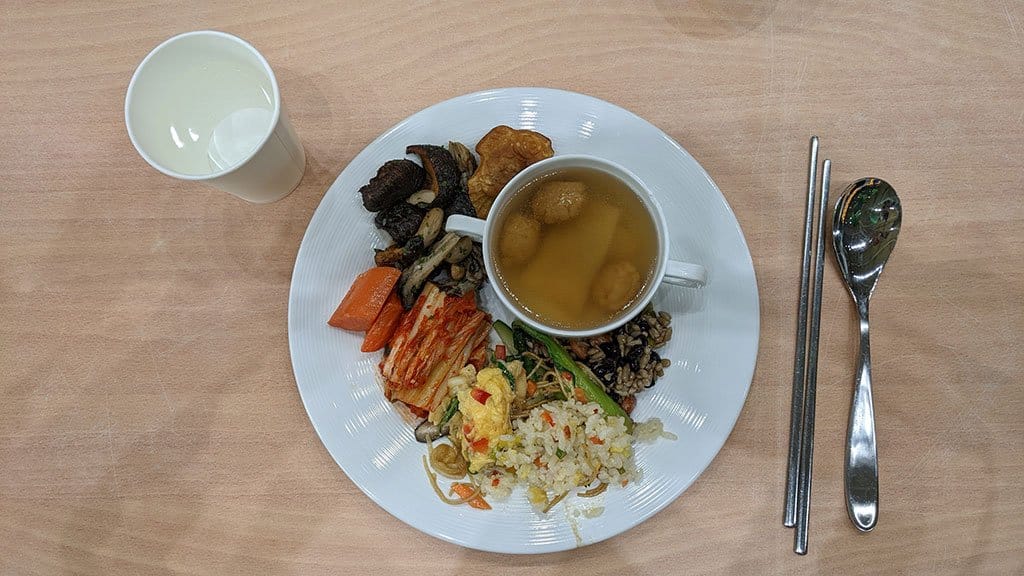 When I went, I tried their fish cake soup, egg fried rice and noodles, mushrooms, carrots, kimchi, bungabong (red bean-filled fish shaped bread), and ssiatjjorim (braised seeds). It was satisfying and filled me up well for the day of snowboarding. The buffet is 38,000 won (22,000 won for kids) for the whole day and 19,000 won for a half day/night. Usually people purchase the buffet pass at a discounted rate when they get their lift passes for skiing and snowboarding.

Overall, the area around Phoenix Park has some pretty nice places to eat at; some of the restaurants and cafes definitely exceeded my expectations! In many cases, the restaurants we visit and the foods we try end up becoming the most memorable parts of a trip, so I hope this short list helps you to enjoy your trip to Pyeongchang. There are of course a few more places to eat at than what’s listed here, but for one reason or another I never got to try. Hopefully, if I ever return to Pyeongchang, I’ll get to go and review them! Let me know if you’ve visited any of these places and what you’d like to see me write about in the future! Happy travels!