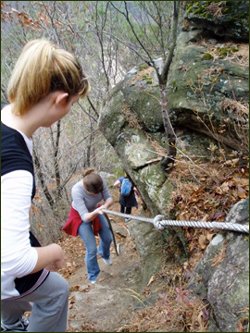 Autumn offers expats in Korea a wonderful opportunity to escape the stagnant air of the city and discover the fresh air and fragrance of Korea’s multihued mountains.
On the weekend, I grabbed that opportunity, joining a tour with Adventure Korea (www.adventurekorea.com) rock climbing and hiking through the colorful fall foliage at Mt. Songni Adventure School and Mt. Choryong a three-hour bus ride south of Seoul.

It was my first trip with Adventure Korea, but not for the majority of the 32 foreigners who came to rock climb, to rappel and to experience the cool weather and colors of autumn.

We departed early Saturday morning from the Express Bus Terminal in Kangnam for a stint at a rock-climbing school, training with rope swings and bridges. Then we made our way to the rock-climbing site.

The four instructors showed us how to put on our gear and set up the ropes. It was learning by doing. We climbed up the sheer rock face connected in pairs to a safety rope line. At the top, we waited our turn to rappel down an even steeper rock face a few feet away.

Leaning backward off the side of a cliff _ even a small one _ is not as easy as it looks. Getting accustomed to the rope was a challenge for me, and it wasn’t until my second attempt that I felt safe and supported and was able to descend.

“I was terrified!’’ said on first-time climber. “But I am so proud that I did it. It’s one more thing I can check off my list.’’ 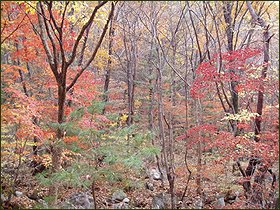 Fall foliage was an added attraction for those going rock-climbing. /Courtesy of Jennifer Radakovitch

That night after dinner while drinking hot chocolate, roasting marshmallows and playing drinking games around the campfire, we unwound and reflected on our experiences.
The next morning there was a sudden downpour accompanied by lightning and thunder. Our leader Park Seok-jin decided to push on, and we were fortunate. As we approached the mountain, the rain cleared.

What started out as a cool and cloudy morning turned into one of the most beautiful sunny days I had seen in weeks.

We traveled on steep rocky paths and followed the ridgeline of the mountain to its summit at 967 meters. The views were breathtaking. The trees below looked as if they were on fire, sporting vibrantly colored leaves of red, yellow and orange.

Those who couldn’t hike because of the slick rocks enjoyed a morning in the town below, taking smaller hill hikes and exploring local temples. We all rejoined at the bottom for ice cream and shared tired but supportive smiles.

It had been a wonderful and physically challenging weekend, and everyone agreed it was time to head home. We made our way down the road in the company of our new friends and boarded the bus once more.

From beginning to end, Park and his staff took extreme care of their participants, paying special attention to the logistical details of the tours, providing transportation, lodging and several meals.

They were accommodating and tried to make their trips as enjoyable and worry-free as possible. Park said that even though it takes a lot of hard work and research to plan these trips, he loves doing it because he loves to travel and meet people.

“I think it’s a great opportunity for foreigners,’’ Park said. “Many foreigners come to Korea, teach English and just drink on the weekends and complain that there’s nothing to do. But if they join our tours, they’ll have plenty to do.’’

He said that his tours are a great way for people to meet and
It is easy to register for Adventure Korea tours through its Web site.

According to several participants on this trip, the Adventure Korea tours enable you to see places that you wouldn’t normally see or even know about. Adventure Korea also provides an opportunity for foreigners to come together and share their experiences.

Between 90 percent and 100 percent of all participants on the tours are foreigners, Park said. Although many people met on this trip for the first time, many knew each other from previous trips.

Park, founder of Adventure Korea, has been organizing adventure tours since 2000. He said he initially just went on hiking and camping trips with his friends, and increasingly friends of friends would join the trips and ask him to organize more.

Adventure Korea offers hikes throughout the year, rafting in the summer, paintball excursions, snowboarding, skiing and ice fishing in the winter, trips to the DMZ and even trips to North Korea.

Park said his favorite trip was to Ullung Island, where the group had to stay extra days because of a typhoon.