Weekend Trip to Seoraksan, Lavender Farm, and the East Coast

Seoraksan is probably one of the most popular if not THE most popular National Park of South Korea. Many Koreans come here on the weekend as well to go hiking or just to enjoy the beautiful nature there. Last weekend we had a two-days-trip to Seoraksan and combined it with a visit to the Hani Lavender Farm and the east coast.

We started in Seoul with the G-Shuttle-Bus in the early morning, but it was already really crowded. It seemed like many Koreans had the same idea as us. It took us around 4 to 5 hours until we arrived at our first destination, a little restaurant near the Seoraksan National Park. There we had delicious Dolsot Bibimbap. It was the best Bibimbap I had so far! And such a good energy boost for the upcoming hike. 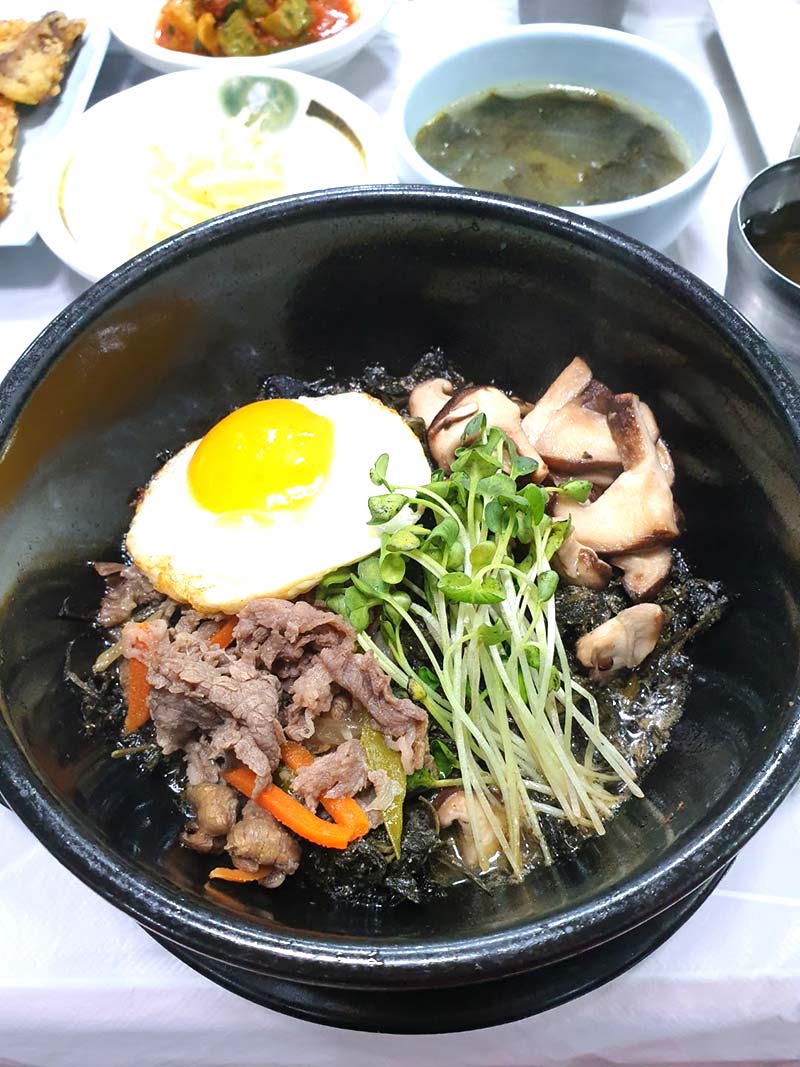 At the Seoraksan National Park, it was quite cloudy so we packed our rain jackets and prepared ourselves for the hike. The clouds made a mysterious atmosphere that was actually quite cool. Sadly taking the cable car wasn’t able that day due to the weather. So the group which chose the Biryong Falls course just went there and the other group which I was a part of went to the Ulsanbawi Rock trail. 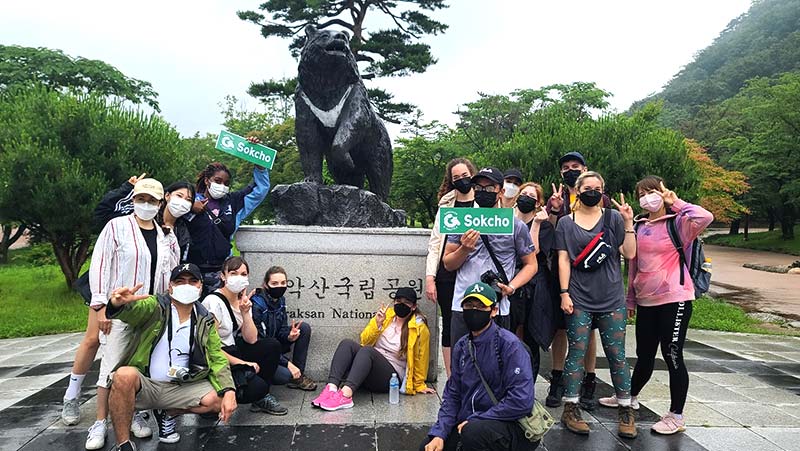 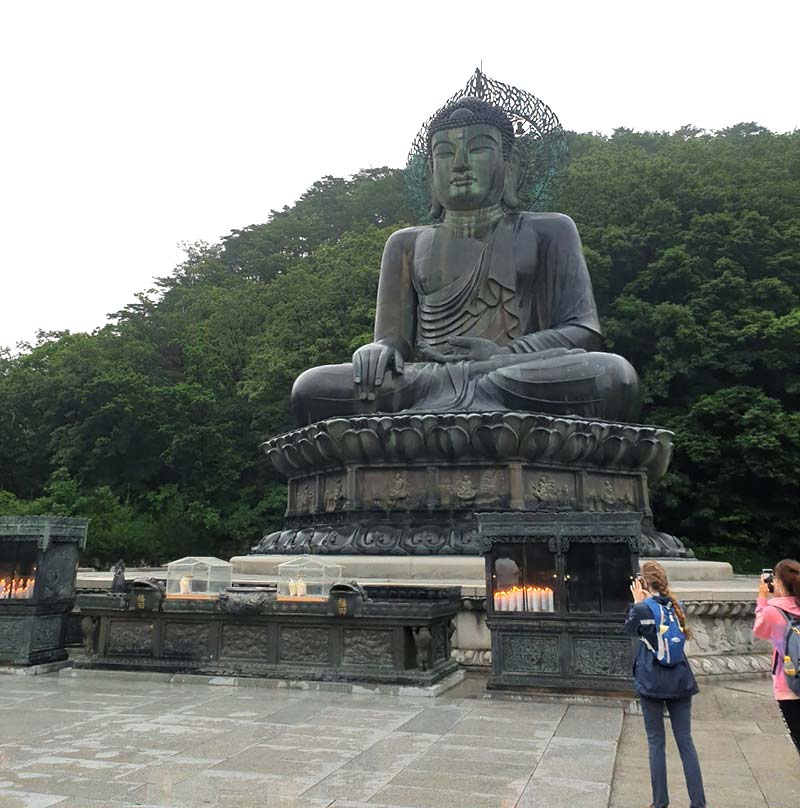 We had a lot of fun hiking up to the top, the group was in a good mood and luckily it wasn’t hot outside. There are many steps on the trail, so don’t underestimate it! We couldn´t see much on our way up because of the clouds, but it seemed like we would step into the clouds which was really cool. 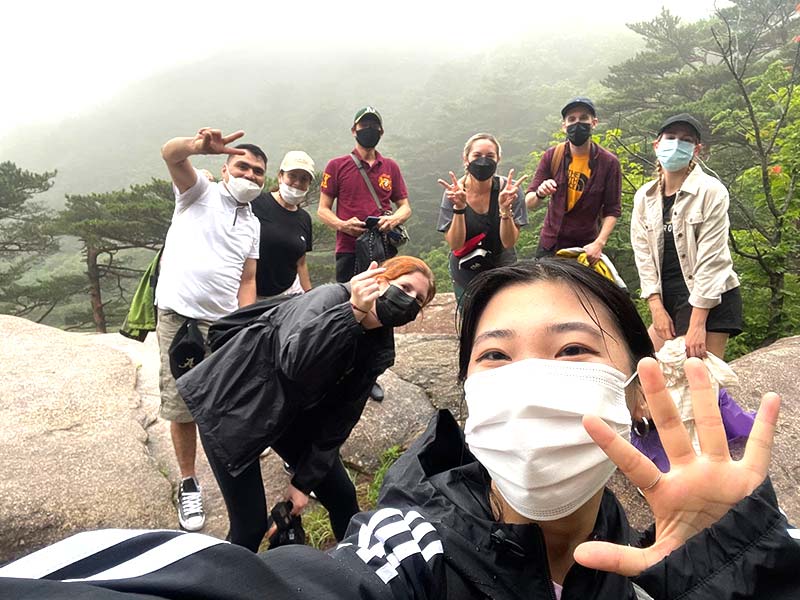 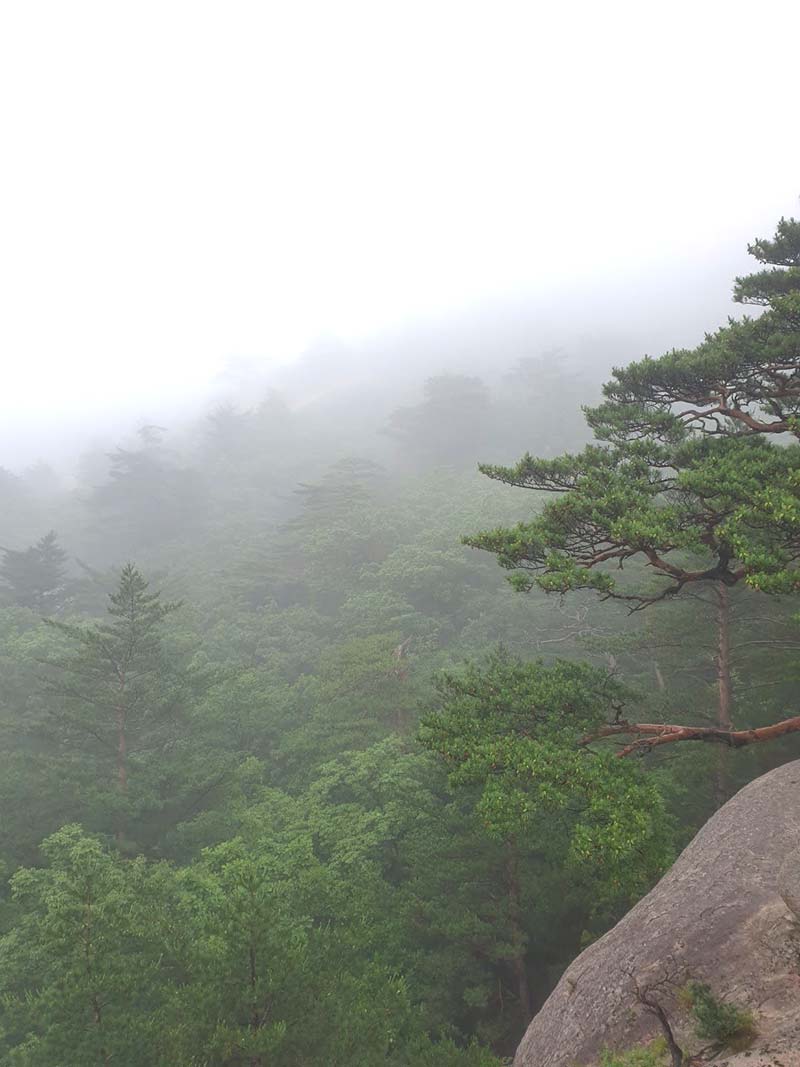 On the last steps the famous rocks only peaked out of the clouds, but then suddenly the sky cleared a little bit and we had a breathtaking view of the rocks! Under the clouds, in front of us the famous photo spot. 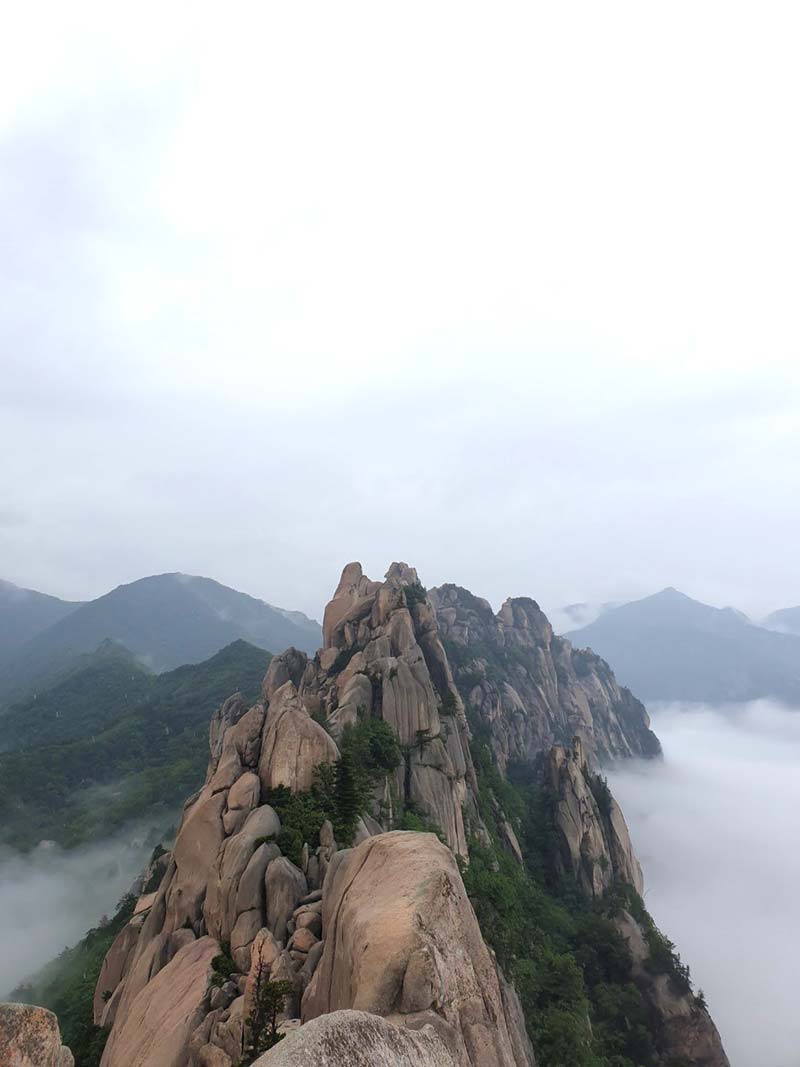 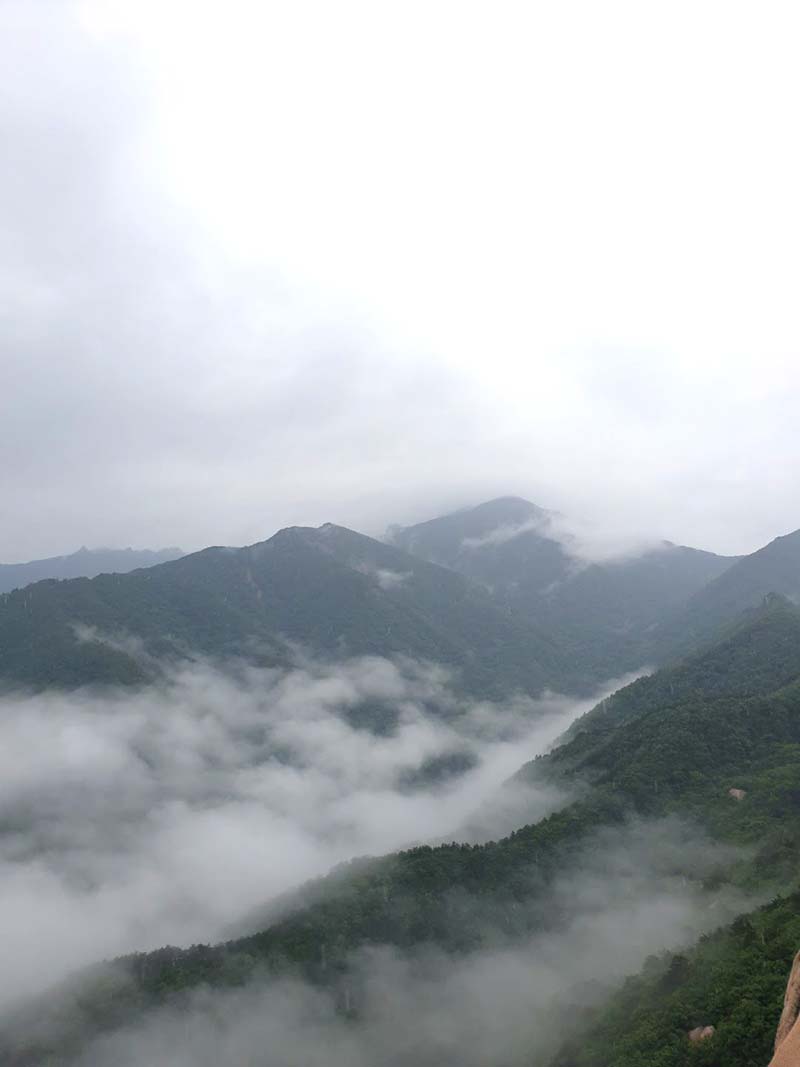 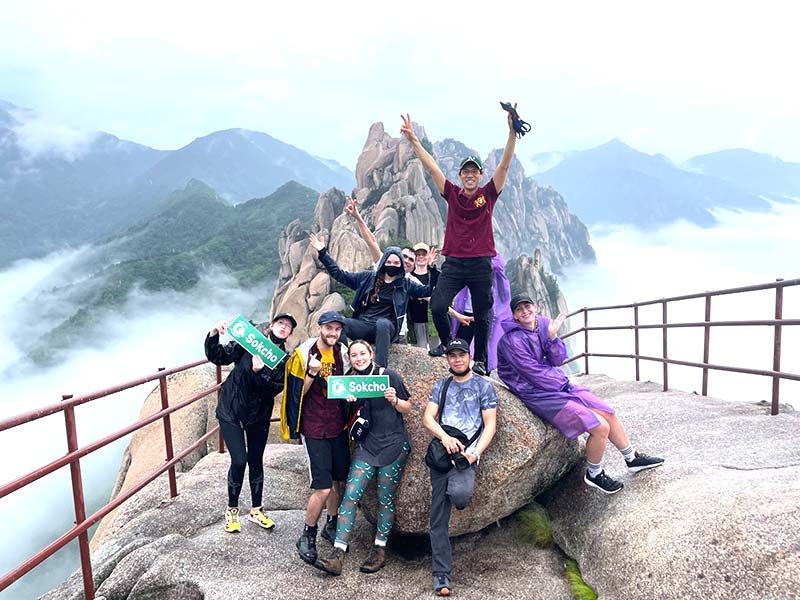 We took many photos there and then went down again. It started raining more and more… When we arrived at our meeting point everybody out of my group was completely soaked in water. Luckily we went straight to our accommodation so everybody could take a hot shower to refresh.
Our place for the night was Osaek Hot Springs, which was even better after that rainy day and the exhausting hike because we could go to the Hot Springs or take a bath in the bathtub in our rooms. The evening was free, so we went to a restaurant for dinner next to the nearby river. 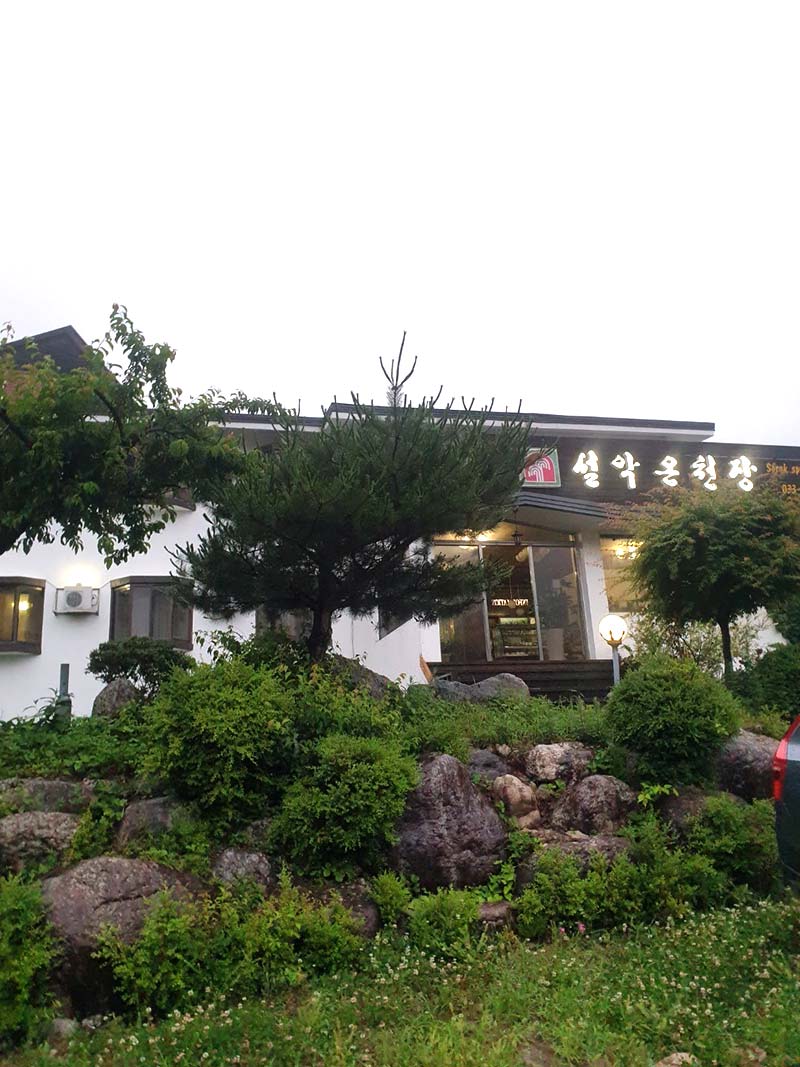 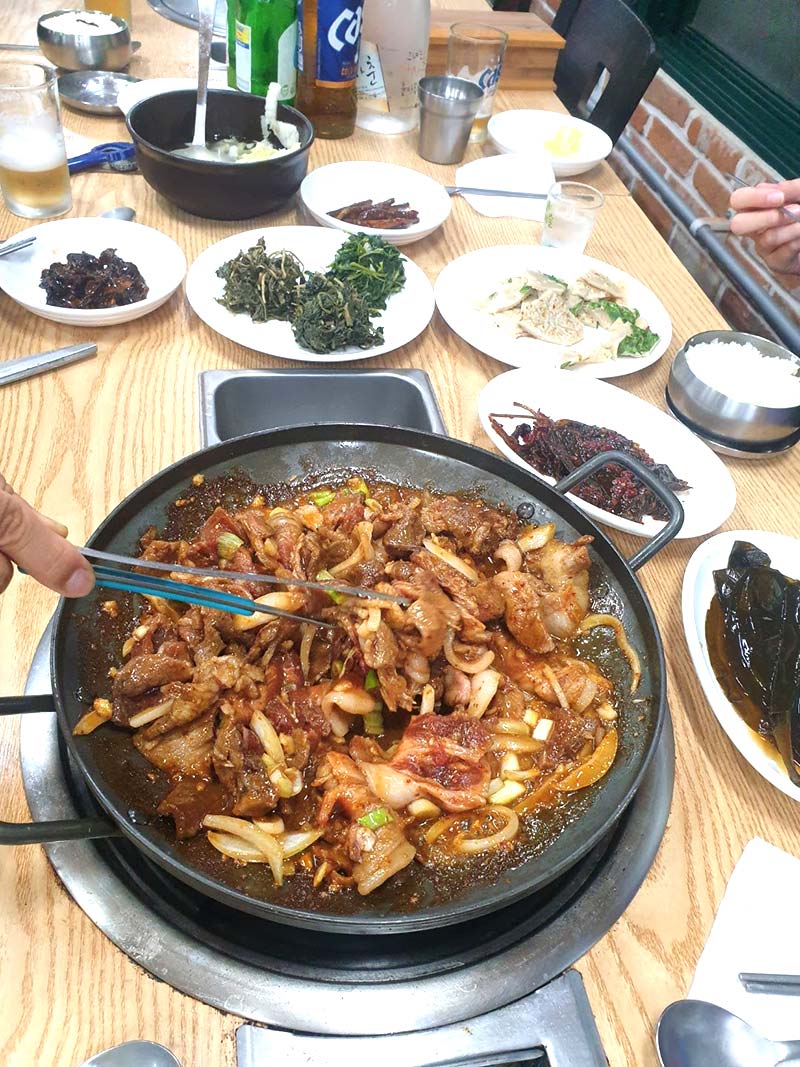 After the delicious 돼지주물럭 (pork mixed and kneaded with sauce), we went back to the Lobby where some of the group came together to eat some snacks and drink together. It was really cool just chatting with each other and enjoying the time sitting together in a group again. 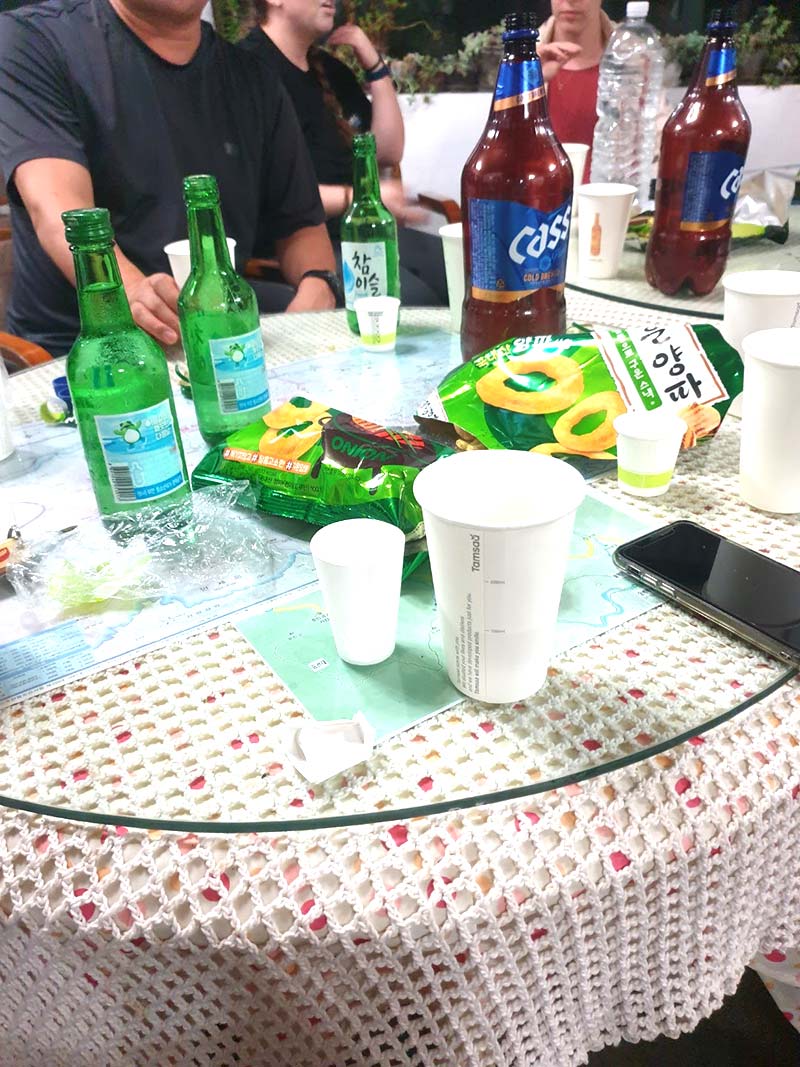 The next morning western style breakfast was ready at 7.30 am, especially the morning coffee was important after the short night! After finally waking up completely everybody changed into a nice outfit and we headed to the Hani Lavender Farm. The flowers still had a beautiful purple/blue color and we took many photos there! The gift shop there is a great opportunity for buying souvenirs and you have to try the lavender ice cream, it is delicious. 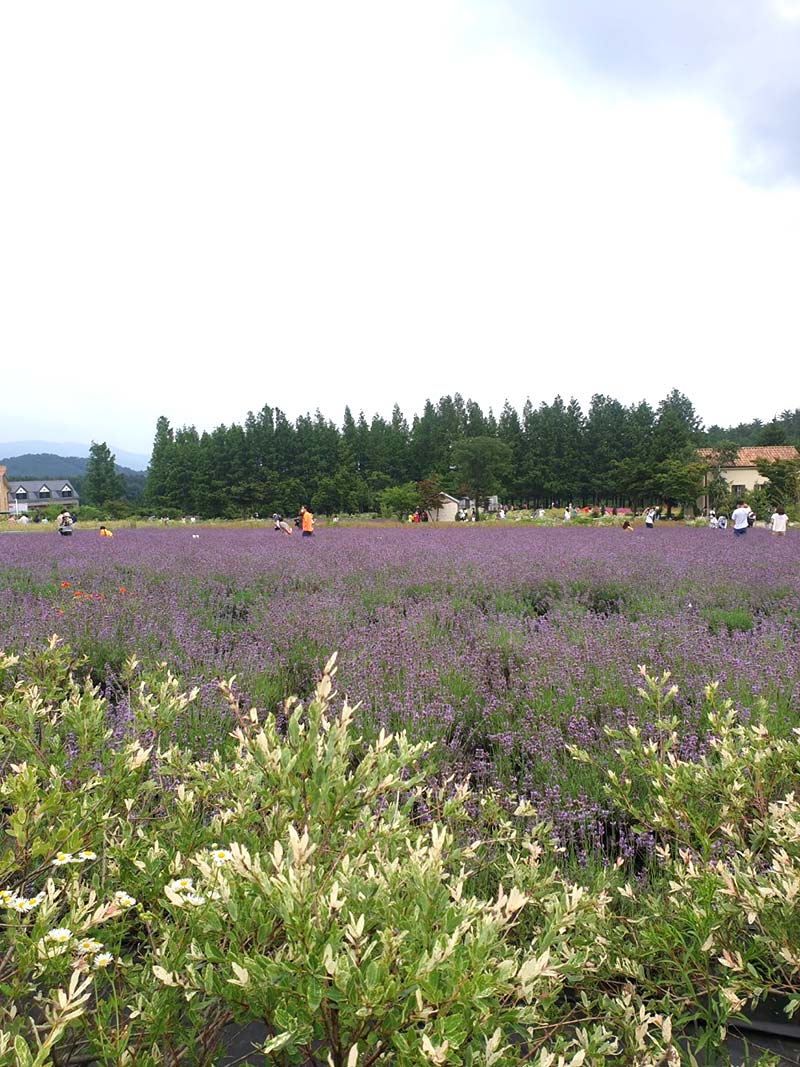 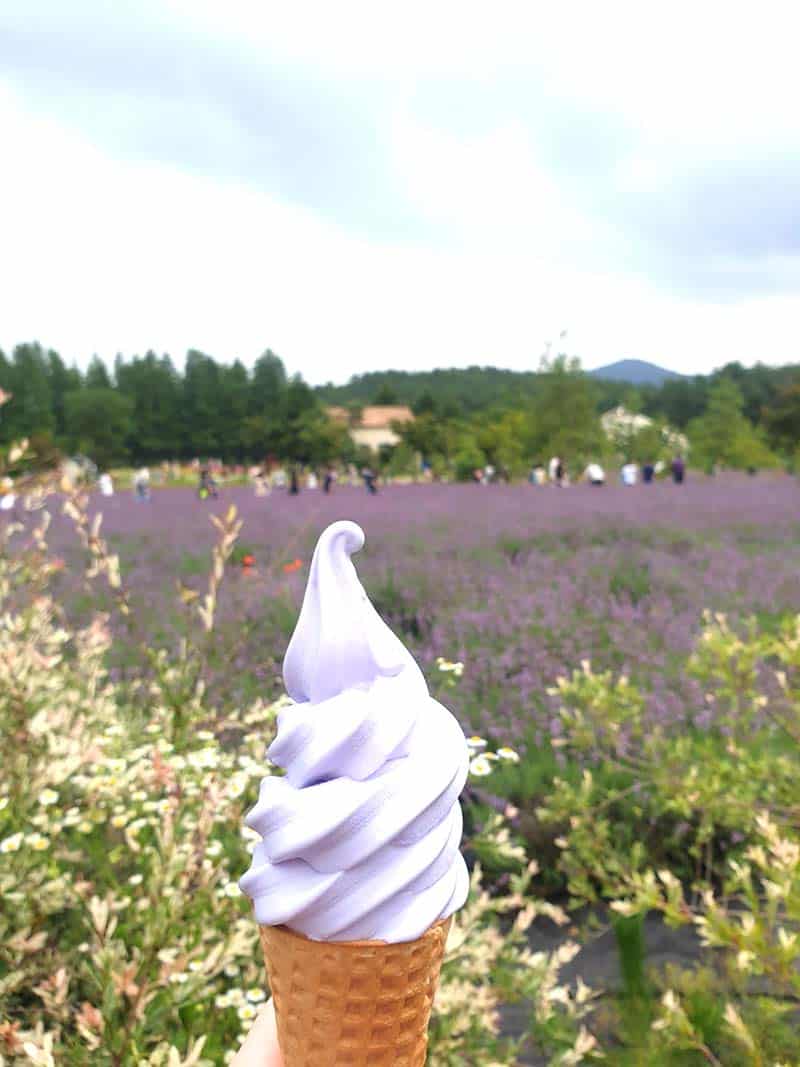 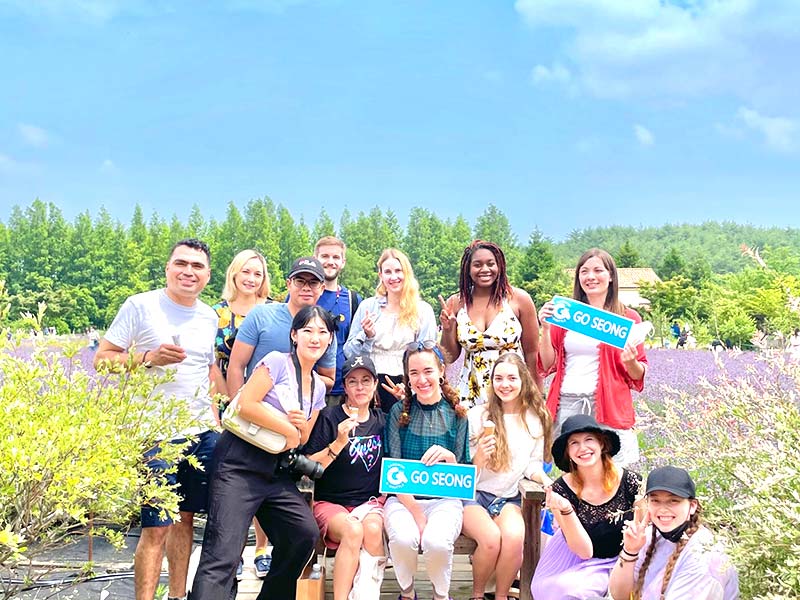 Then we stepped into the bus again and drove to Hwajinpo Beach which is known for its 1.7km long shoreline. Normally there are many food trucks, but at this time it was quiet and empty at the beach. So we decided to change our plan and drove to Songjiho Beach 20km away from Hwajinpo for our lunch. And it was a great decision! Songjiho is beautiful and I finally got my long wanted Iced Americano at the beach café (and a delicious pizza with figs). Some of the group went swimming as well and enjoyed the cold water in the hot sun. The rest stayed at the beach, we took many photos and even buried one of us in the sand. 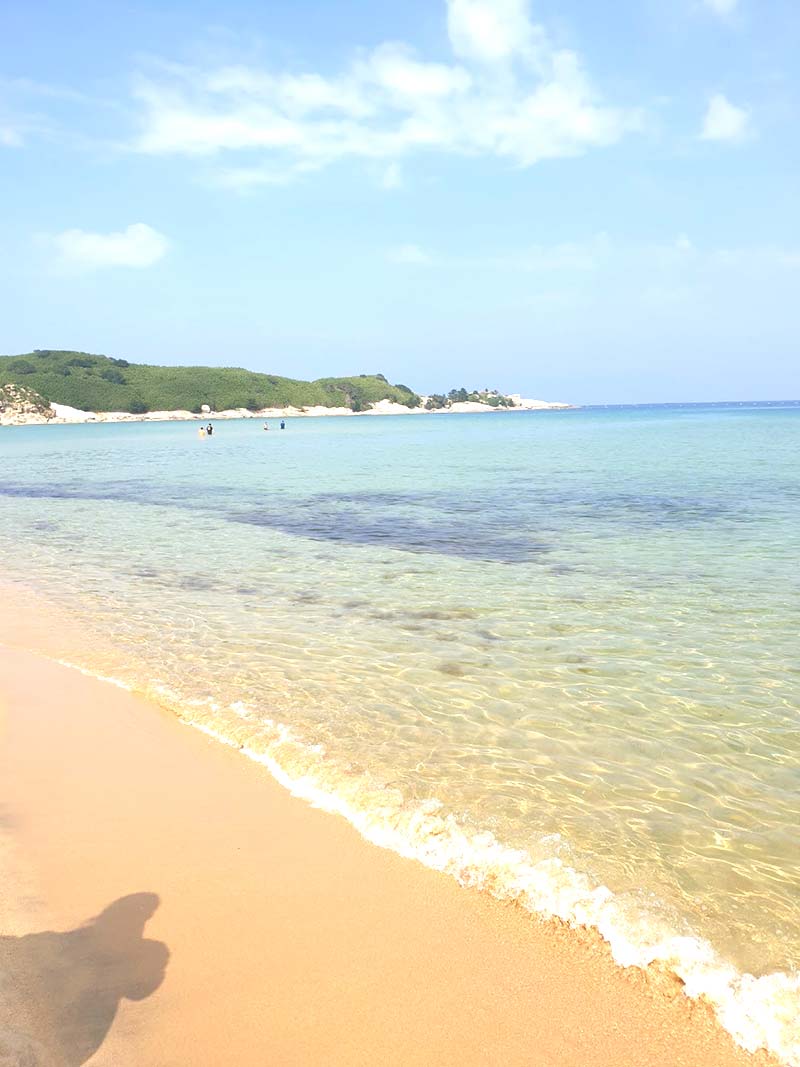 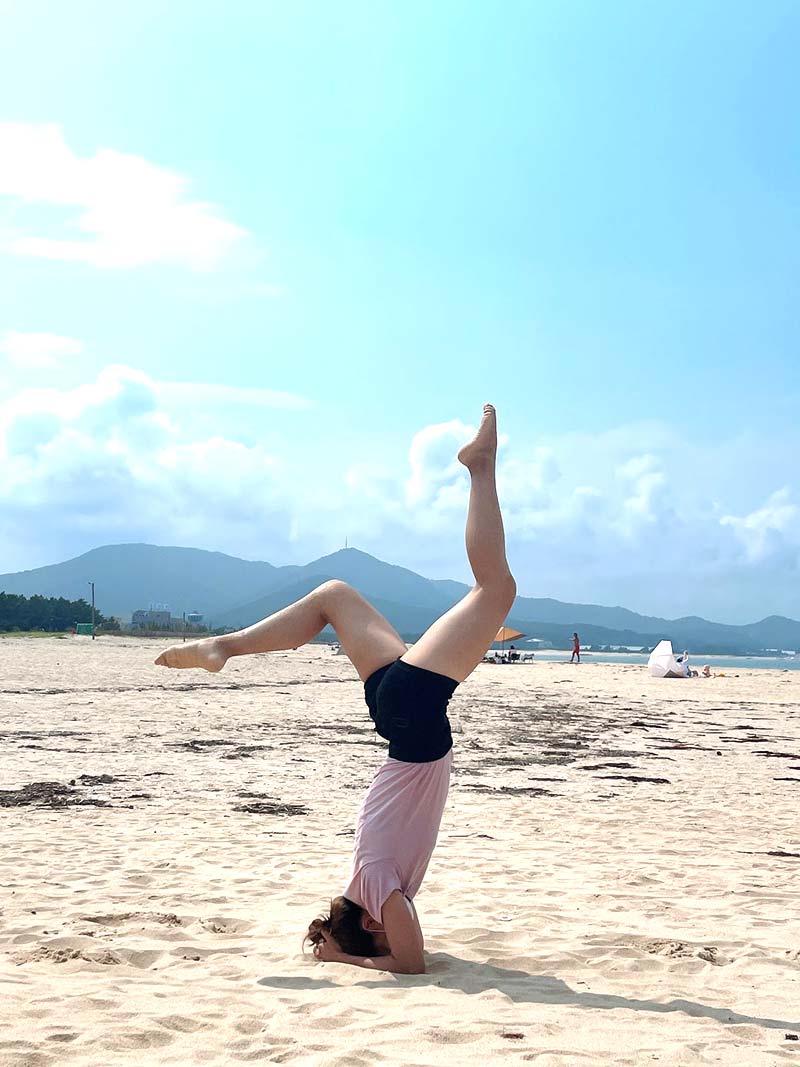 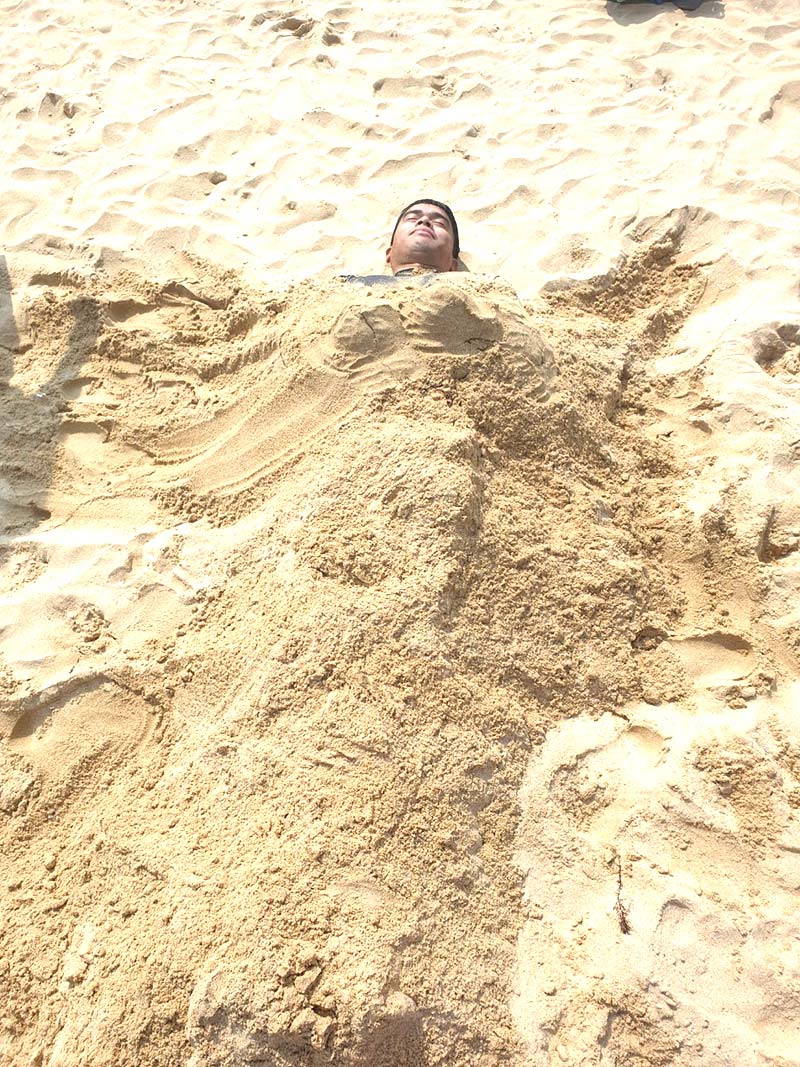 At 3.45 pm we headed back to Seoul which took us around 5 hours because of the traffic. So we were at the final destination at 9 pm, said goodbye to each other, and went home to get some rest after this exhausting but funny weekend. The group was really cool and talkative, it was a lot of fun finally experiencing group activities again! And the east coast is definitely a must-see!