Above the Clouds on Mt. Sorak 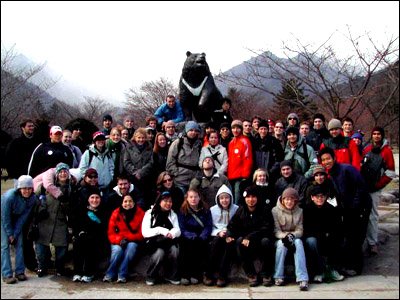 Participants from Adventure Korea’s trip to Soraksan National Park pose at the base of Mt. Sorak, a popular destination for hiking enthusiasts.

Last weekend saw a group of enthusiastic foreigners exploring one of the most beautiful places in Korea, Soraksan National Park. Organized by Adventure Korea, the hiking trip to Mt. Sorak, is just one of their excursions that gets foreigners into the fresh air, meeting new people, and out experiencing Korea outside Seoul.
Early Saturday morning two busses, full of people eager to leave the stagnant air of the city, left Express Bus Terminal and headed for Soraksan National Park.

Situated in Kangwon-do, Soraksan National Park is Korea’s most famous national park and one of the most beautiful. The mountains stretch over an area of 373 square kilometers with their highest peek reaching 1,078 meters high, and during the weekend we were to see just a small part of it.

After a lunch of pipimbap, supplied by Adventure Korea, we arrived in outer Mt. Sorak, the location for the first day’s hike and were given two hiking options.

The first was to hike to Ulsanbawi rock, a difficult but rewarding climb that included scaling 800 steps. Those wanting a gentler walk could take a cable car followed by a 20 or 30 minute hike to the Kwonkumsong Fortress, where, due to its high altitude of 1,200 meters, you can enjoy a stunning bird’s eye view of the surrounding mountains.

Along with most of the group I chose the Ulsanbawi rock hike and set off through the beautiful scenery. Along the hike there is a temple and a large spherical rock (Hundulbawi), which can be rocked!

As we passed, people took a well earned rest, had their picture taken and attempted, often with success, to move the five meter high Hundulbawi rock. The walk got tougher at the bottom of Ulsanbawi rock. Confronted by hundreds of steps set at a very steep angle into the rock and with the weather closing in around me it took dogged determination to overcome my fear of heights and reach the top.

Once I arrived at the top the snow that had plagued my ascent suddenly disappeared and the clouds broke offering spectacular views across the Soraksan National Park and down to the East Sea.

After descending to ground level we were taken to our hotel in the Osaek area. Before dinner we had time to relax, soak aching muscles and share our experience of the day’s hike in the hotel’s hot spar.

There were a number of restaurants near the hotel but the majority of the Adventure Korea group ended up in the same restaurant to enjoy the evening’s drinking and merriment.

Partying with newfound friends carried on well into the night, but as I wanted to be fresh for the morning, after partaking briefly in a drinking game and chatting to a few people I retired to bed.

On Sunday we hiked the Chuchonkol course. The course begins at a natural spring where we sampled the Osaek Mineral water.

As we lined up for a taste of the water, people emptied their water bottles in anticipation of filling them with fresh tasting spring water. After tasting the water I was glad I hadn’t followed suit, as it tasted a little like carbonated water far past its best!

The Chuchonkol course took us through a scenic valley to the beautiful Yongso waterfall. After taking in the waterfall and basking in the sun we headed back for lunch.

Arriving back at Osaek we had a lunch of rice and side dishes before packing up, boarding the bus and heading back to Seoul after a thoroughly enjoyable weekend.